In the early 1700s, author Jonathan Swift wrote about how quickly falsehoods can fly and that “truth comes limping after it.” Over the centuries, those words evolved to become this well-known saying: “A lie can travel halfway around the world before the truth can get its boots on.” 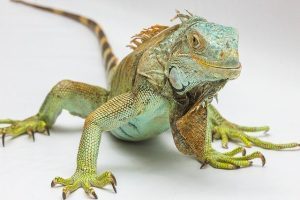 Conspiracy theories aren’t new. Some people still believe the Earth is flat, or that alien lizard people are living on Earth disguised as certain celebrities, or that Elvis never really died. But it feels like this year has given birth to more than its share of weird ideas.

I’m fascinated by how absolutely certain some people are about the conspiracy theories they’ve adopted. There are only a handful of things of which I’m certain, so I’m amazed when people don’t even allow for the possibility that they might be wrong.

Like many phenomenons, the Internet has made conspiracy theories easier to spread. Not only can the truth not get its boots on, it can’t even wiggle a toe before a lie goes viral.

Recently I ran across an article by a technology columnist named Kevin Roose who wrote this in The New York Times: “There’s simply too much information now, traveling over too many channels, for people on any side to be satisfied with a single, straightforward answer to any question.”

In other, less sophisticated words, the Internet is like a giant buffet – like The Golden Corral times a million. Most people eat the main dishes like steak and potatoes, but there are some who, for whatever reason, are drawn to the weird Jell-O mold full of unidentifiable chunks.

Perhaps something in our human nature lets us cling to wild theories, especially when we need explanations or just want those theories to be true.

I sometimes struggle with reality during the month of October, especially after stores put out bags of Halloween candy. When I place the candy bags in my shopping cart, I tell myself I’m doing it because it’s a good deal (it’s not) and because it’s for the trick-or-treaters (even though I know it won’t last until the end of the month).

Then once I get it home, I put it in my cute, Halloween candy bowl and admire the shiny packages of chocolates and tell myself I won’t eat any. (Yeah, right.)

And then once I start eating it, the lies get even bigger and more detached from reality. I engage in something I call “Halloween candy math.” It’s a special kind of math where two plus two equals “maybe just one more Reece’s cup.”

When you’re using Halloween candy math, you can make yourself believe that four or five “fun size” Twix bars don’t necessarily add up to a full-size Twix bar. They can’t add up that high because they’re just so small and cute and “fun” that they obviously wouldn’t hurt nice people’s waistlines, right? (And as long as those nice people wear pants with elastic waistbands, it’s easier to keep on believing.) 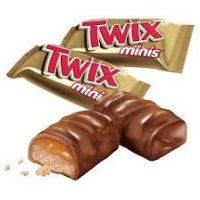 Today I discovered that Twix bars not only come in “fun size,” there’s also an even smaller package called a “mini.” As I demolished one of these “minis” in one bite, I wondered how many minis add up to a full-size, guilt-inducing candy bar. Is it 25 minis? Because I’d really like the answer to be 25.

Get on board with that theory, please.

And spread the word!