You don’t realize how important your floors are until someone says you can’t walk on them – for a week. Unless you have a weird system of monkey bars on the ceiling of every room, living in your house while not touching the floor is impossible.

That’s why most normal families pack a bag and leave home when the work crew that’s refinishing their hardwood floor says they can’t walk on it for a week. But then again, no one ever accused us of being normal. 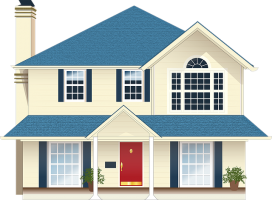 When Tom first floated this idea by me – how to stay in the house while not touching the floors – I almost dismissed it as lunacy. But the more I thought about it, it seemed almost doable. I agreed to give it a shot, with the stipulation that if it didn’t work out during the first day, we’d go to a hotel room like rational people. He agreed.

Our 30-year-old house has hardwood floors in the foyer, kitchen, stairs and upstairs hallway – floors that had yellowed to a not-so-pleasant shade of jaundice over the years. There are only two rooms (and a bathroom) in the house that aren’t connected to those hardwood floors.

Our plan was to move a few mattresses to those rooms and set up camp in the bonus room above the garage. It already had a television, a place to sit and a connecting bathroom with shower. With the addition of a few mattresses on the floors, we figured we could make it work for five days.

But there was a catch. The only way to get to the bonus room was up a flight of hardwood stairs – stairs we weren’t allowed to touch. 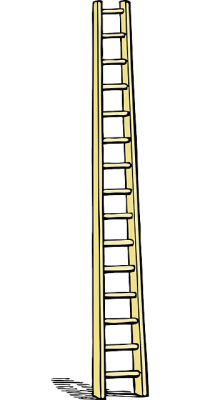 Tom proposed a solution: “We’ll put the ladder on the deck and lean it against the house right under the upstairs window. We’ll eat in your mom’s kitchen, and then we’ll just climb in and out of the house without ever touching the floors.”

So, we dragged our mattresses to the bonus room and moved a week’s worth of clothes over there, too. Tom and the boys secured the ladder, and my mom (who lives in the addition we built onto the house last summer) graciously let us graze in her kitchen as much as we liked. She kept our pets at her place, too.

The actual ladder climbing wasn’t as scary as I thought it might be, and the kids thought it was fun. The hardest part is getting your body through the window without losing balance and plummeting to the deck below.

But I was glad the window wasn’t visible from the street. I can just imagine what our neighbors would have thought when they spotted the five of us using a ladder to break into our own house: “Well, look at that. The Rockwoods have gotten even weirder. I didn’t think it was possible.”

At the end of the work week, the floor refinishers allowed us to walk back into our house rather than climb in through the window. It felt like a real luxury to stroll through the kitchen again in sock feet. And thankfully, the wicked case of floor jaundice has been stripped, sanded and stained back to a beautiful brown.

I’d like to say the string of home improvements we started last spring is finally done. But anyone who has ever owned a home, especially an older home, knows that most houses are a continual work in progress. One project tends to domino into the next, until you’re either too tired or too broke to keep going.

But for now, we’re looking forward to a break from all the projects and their accompanying mess, dust and bills. Time to put the ladder away and enjoy a long winter’s nap.