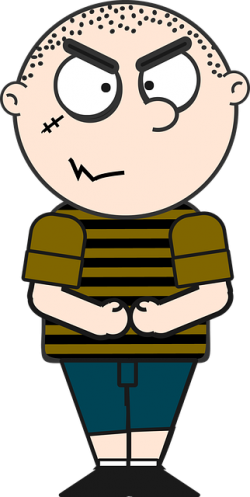 Warren. That was his name. I didn’t know who he was, but I knew he was a very, very bad kid. Sometimes I wondered what kinds of misdeeds Warren was guilty of because I saw his name on the chalkboard every time I went to music class at Julia Shannon Elementary School in 1983.

We had music class two times a week in fourth grade, and every time my class shuffled into the room, Warren’s name was already on the chalkboard. I assumed he had probably already had music class that day and had broken all sorts of rules yet again. The music teacher was a patient woman, but when she got cross with someone, she’d write their name on the chalkboard right under Warren’s name. It was sort of a “first strike,” and any subsequent bad behavior would get you a one-way ticket to the principal’s office, where I assumed Warren had probably taken up permanent residence.

For the first half of fourth grade, my assigned seat in music class was at the back of the room. After the Christmas holiday, the teacher rearranged her classroom and reshuffled the seating chart, which put me right up front – just a few feet away from the chalkboard.

That’s when I noticed that the infamous Warren, who I’d built up in my mind as a mischievous fourth grade rebel, was not even a real person. That’s because the name “Warren” had never been on the board at all. The word was “Warning.” People who misbehaved in class would get their name written right below the word “Warning.”

That was the first day I realized my vision wasn’t good. I could see fine when I was close to the board, but if I was midway or any farther back, “warning” became “Warren” and everything else was blurry.

I didn’t tell my mother, of course, because by the time I’d reached 4th grade, I knew that getting glasses was only slightly less embarrassing than accidentally peeing your pants at recess or throwing up during a school assembly. So, I squinted and faked clear vision for a full year. In 5th grade, the school nurse administered vision screening tests, which of course I failed miserably. A few weeks later, I had glasses and the full-fledged nerd status that went with them.

By 8th grade, though, I’d talked my parents into letting me try contact lenses. After lots of practice, I became a pro at getting contacts in and out, and I felt free again. No raindrops on lenses. No fogging up on cold days. No smudges, scratches or glasses falling off during gym class. And for me, contacts were more comfortable and gave me better peripheral vision than glasses.

Thirty-five years later, I still wear contact lenses nearly every day and love them as much as ever. But lately I’m having flashbacks to 4th grade music class. Except this time, I’m not squinting at something up ahead in the distance. This time it’s right in front of my face. It’s the menu. The back of the medicine bottle. The small type of an owner’s manual.

What’s a nearsighted girl to do when even her close-up vision gets wonky? My contacts that let me see into the distance can’t help me with this problem. I’m stuck in the blurry middle.

My husband Tom, who is five years older than me, warned me this would happen once I turned 45. “Things start to malfunction,” he said, “and the vision is the first to go.” Tom used to wear contacts, too, but now he has made his middle-age peace with a set of bifocal glasses. But my inner fourth-grader doesn’t want to go back to those days. I don’t want to look like the school librarian who always wore a thin gold chain necklace attached to a pair of thick, black-framed eyeglasses that sat perched on the tip of her nose.

So, for now, I’m holding off. As long as my arm can hold the menu far enough away for me to read it, I’ll be okay. And thankfully I still have teenagers in the house whose young eyes can read anything, no matter how close or far. And for those times when the kids are at school and my arm isn’t long enough, I’ve stashed a pair of “reader” glasses in my purse that I can pop on in case of emergency. I even game them a nickname: “Warren.”