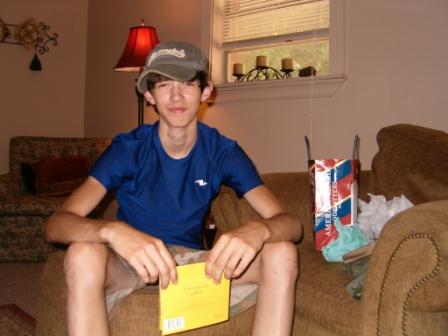 “Therefore, whether you eat or drink, or whatever you do, do all to the glory of God.” 1 Corinthians 10:31

My older son, Spencer, is a team-sports kind of guy. Since starting school 12 years ago he has at one time or another played tee-ball, baseball, football, soccer, and basketball. He’s had a good deal of success as an athlete, and he has enjoyed it.

My younger son, Seth, on the other hand, is a different story. When he was five years old, we decided it was time for him to start the team-sports thing like his brother. He played soccer for one season and then said he didn’t want to play again the next season. When we asked him why he didn’t want to play any more he simply said, “It takes too long. I need to be home with my stuff. I have things I need to do.”

So now Seth is a very busy young man but just not a team-sports kind of guy. He generally has some work lined up in his mowing and landscaping business. And if he isn’t working, he is hunting and fishing. Every day as soon as he gets home from school, he grabs a snack, fills a canteen, and heads out the back door directly into the woods where he hunts whatever animal is currently in season. If he kills something, he brings it home and prepares it and cooks it. If there is no animal in season, then he calls a friend to pick him up to take him fishing, or he walks a mile up the road to a pond where he can “wet a hook” for a few hours.

Spencer has a room full of well-deserved trophies that he has earned as an athlete. He recently went to his last baseball awards ceremony before he graduated high school, and he received so many plaques, trophies, and certificates that he needed help to carry them to the car.

Susan and I think Seth ought to receive a trophy, too. He deserves a plaque that says “Best-Supporting Brother.” From the time Seth was a preschooler, he has faithfully followed his brother’s athletic career. He has waded mud and chilled himself to the bone in winter rain to watch his brother play soccer and football. He has baked in scorching heat, often for several whole days in a row, as he watched Spencer play in summer baseball tournaments. He has ridden long distances to watch his brother play in playoffs in far-away towns. All that is pretty remarkable, but one thing in particular makes it extraordinary. Seth has never once complained. We think it’s because he loves Spencer deeply and is very proud of him.

The Christian poet John Milton wrote, “They also serve who only stand and wait.” He was blind, but he realized an important spiritual truth—we all have a place of service in God’s world. Sometimes God puts us on the playing field of life, and sometimes He puts us up in the bleachers cheering on someone else. In both cases we do the will of God—because it is a godly and holy thing to support and strengthen a friend.

Dear mama, who needs your help this week? What friend can you encourage and strengthen by your friendship and your presence? Pray that the Lord will give you wisdom and insight into how you can daily “do all to the glory of God.”

Dr. John L. Cash is the “Country Preacher Dad” *Sing that  title to the tune of “Secret Agent Man” He was raised in Stuttgart, Arkansas, and is beginning his third decade of being a country preacher in the piney woods five miles south of the little town of Hickory, Mississippi. He and his lovely wife, Susan, and his sons, Spencer (age 18) and Seth (age 14) live in the parsonage next door to the Antioch Christian Church” (where Seth cooked blackened catfish for the family from his latest catch just last night). You should write him at extramailbox@juno.com.