“Surely blessing I will bless you, and multiplying I will multiply you.” ~ Hebrews 6:14 (NKJV)

When I was a little boy in the 1960’s, before I started elementary school, I watched Captain Kangaroo every morning.Children’s programming was special back in those days.We didn’t have VCR’s, or DVD’s, or cable TV back then. Everybody got the same three networks, and cartoons came on Saturday mornings and for an hour each afternoon on weekdays.If you were going to watch kid shows, you had to be there in front of your set when they came on. Believe you me, our harried moms made sure we were there.

So, there I was, morning after morning, waiting for the good Captain and his sidekick Mr. Greenjeans to come on. And, every morning, right before the Captain Kangaroo theme song began, an Episcopalian priest came on and offered a devotion. I still remember his name: “The Reverend 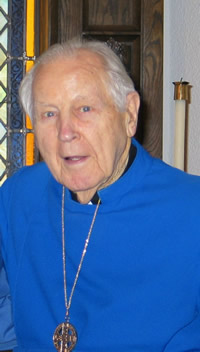 Rufus J. Womble”. I always liked seeing him. He looked like a really nice man. I can’t remember a single devotional thought that he gave, and, being a child, I really couldn’t understand much of what he was talking about. But even though I didn’t understand everything, there was one thing I’ve never forgotten. Every morning, as he ended his talk in his clerical collar and flowing black robe, he lifted up his hand in benediction, and said, “May GOD bless you, THIS day!”

As you can see, The Reverend Rufus J. Womble made a deep impression on me. Well, flash forward about 40 years. I was sitting at a meeting with a preacher friend of mine, and out of the blue I told him what I just told you. He said, “Dr. Rufus J. Womble? Yes, I know of him. He’s a famous Christian writer, living in Virginia. I have his books. I think he’s still living, but he is quite old.”

I decided to call Dr. Womble on the telephone. No, it was more like I had to call him, or maybe I was supposed to call him. The next Sunday afternoon, I dialed Dr. Womble’s number. Lo and behold, he came to the phone.

I told him how much I liked him when he was on TV all those years ago. We visited for quite some time. Then Dr. Womble said, “John, thank you so much for calling me. You would think that people who write books would have exciting lives. But, I’m over 90 years old now, and really, it’s kind of lonely. It is so nice to be remembered. Now before you hang up, I want you to pray for me.”

So, that afternoon, over the telephone wires, a little boy blessed an old man. It was the same old man who had blessed the little boy, over the television, so many years ago.

Live the way you’re supposed to this week. There’s no telling who might be watching, and how things may turn out. May God bless you, this day.

Dr. John L. Cash is the “Country Preacher Dad.” He was raised in Stuttgart, Arkansas, and has spent the last 27 years being a country preacher in the piney woods five miles south of the little town of Hickory, Mississippi. (On week days has a desk-job at a public school and teaches Latin on closed-circuit-television.)  He and his lovely wife, Susan, live in the parsonage next door to the Antioch Christian Church. The Cashes have two sons, Spencer (age 21), and Seth (age 18), who live in the parsonage, too, except when they are away at college.  He would love to hear from you in an email sent to countrypreacherdad@gaggle.net.