Once upon a time, a long time ago, a guy came to my tiny apartment. I was 24 years old and on my fourth date with someone I’d met on a blind date. At the time, he was not my boyfriend. We were still in that oh-so-fragile “getting to know you” stage – the point at which any little thing could send the love train careening off the tracks.

I’d invited him over for a home-cooked meal, which meant I’d made the one chicken dish I knew how to prepare. But there was no need for him to know that information just yet. A few minutes before he rang my doorbell, I scurried around the apartment straightening things and making sure everything looked just right. After all, seeing someone’s home for the first time can tell you a lot about a person, so I knew appearances mattered.

As I scanned the kitchen, I noticed that the houseplant sitting on the counter looked, well – a little dead. 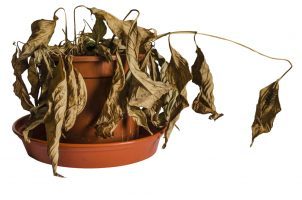 Sadly, it was not the first houseplant I’d neglected into an early grave. I was a young newspaper reporter at the time, working long hours. Remembering to water the plant often fell to the bottom of my to-do list.

Then the doorbell rang, and I had only seconds to decide what to do with the dry, brown plant. I didn’t want it sticking out of the trash can, so I quickly opened a bottom kitchen cabinet and shoved it inside. I’d throw it away later.

The date clicked along smoothly, and the guy ate the chicken dish and said he loved the cherry cheesecake I’d made from a Jell-O box kit – the cheesecake he assumed was homemade. I didn’t correct him. (Made at home equals homemade, in my book.) Dinner conversation sparkled, and the guy scored serious bonus points when he insisted on doing the dishes afterward.

I got so caught up in the talking and the flirting that I never once considered what might happen if I let this guy help dry and put away the dishes. As he reached for that kitchen cabinet door, I couldn’t react fast enough. Just as the word “Wait!” flew out of my mouth, he saw it – the dead houseplant banished to a dark kitchen cabinet, like a corpse hidden away from investigators.

“What’s this?” he said as he stared at it, moving it into the light.

“Um, well, it’s a plant?” The embarrassment threatened to swallow me whole.

He looked confused. “And… why is it in a kitchen cabinet?”

“It kind of…died. I was going to throw it away later.”

“It might’ve died because you kept it in a cabinet.”

“I’m pretty sure it was the lack of water that killed it. The cabinet was just where I stuck it after the damage was done.”

To his credit, the guy didn’t hold it against me. But that hasn’t stopped him from teasing me for the past 22 years about my history as a plant murderer.

I’ve pointed out to him many times that, despite my track record with plants, I’ve done a good job of keeping our three humans alive. In fact, our oldest human child moved to college a few weeks ago. And I regularly feed and water the other two kids, who grow so fast I have to buy longer pants for them way too often.

The kids are smart because, when they need food or water, they make noise about it. That dried up houseplant, on the other hand, never once tapped me on the shoulder and asked for macaroni and cheese. If it had, it might still be with us today.

But here’s the redemption part of the story which proves that even an old-ish plant killer can turn over a new leaf. Several months ago, I stumbled across a headline that read “Anyone can keep these houseplants alive.” What’s that, you say? Challenge accepted! I couldn’t click that headline fast enough.

I bookmarked the article and showed it to the clerk at the local nursery. I asked for two of the plants mentioned – the ZZ plant and the snake plant. 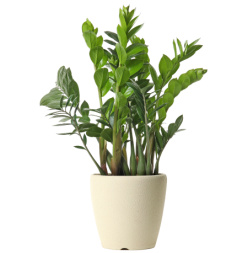 The article said both were true survivors able to withstand limited sunlight as well as a decent amount of neglect from someone who might accidentally forget to water them for up to a week at a time.

So far, so good. One hundred and twenty-two days and counting. My plants are green, healthy and at no risk of being shoved into a kitchen cabinet. Tom is so impressed with my newfound skills that I bet he’d date me all over again.