Last week I saw something that made me laugh but also gripped my heart in the same moment. Our little beagle mix, Charlie, was walking up the stairs ahead of me. But instead of his usual fast trot to the top, he took one step at a time, stopping on each one before carefully planting one hesitant paw to climb another one. 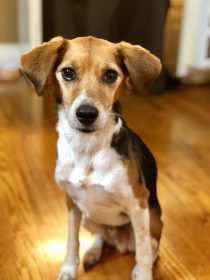 I laughed as I followed him upstairs because his slow shuffle was such a big departure from the graceful gallop he usually does on the steps. But then I realized what it meant. While we were busy raising kids and trying to keep up with life, Charlie became an old dog.

Modern studies suggest that the old theory of “dog years” being seven times that of human years isn’t accurate. I checked several sources and calculated that, in human years, Charlie is a little over the age of 60 – a card-carrying member of the senior citizen class.

Over the past year, we’ve noticed a few gray hairs on his face. They add a dash of distinguished maturity to his brown, black and white beagle markings. But until lately, that sprinkling of silver hair was the only thing showing Charlie’s age. For the past decade, he has been living life at top speed.

Charlie is a gold-medal “door dasher,” which means that, at least once every other month or so, he slips out the door faster than you can yell “No!” Then he takes off across the yard so fast that he’s nothing but a brown blur streaking across the neighborhood – tail wagging and nose to the ground the whole way. Since catching him is nearly impossible, we wait until he wears himself out enough to come home. With head bowed, he looks up at us with soulful brown eyes in an expression that says, “I’m sorry for running out the door, but I’ll probably do it again first chance I get.”

One of Charlie’s favorite places to escape to is my mom and dad’s house. They used to live a couple blocks from our house, and he somehow managed to find his way there any time he escaped the backyard fence or the house. I’d get a call from my mom who said, “Charlie came to Grandma’s house again. You can come pick him up when you’re ready.” Then she’d feed him extra treats and give him a soft blanket to nap on, guaranteeing he’d be back on her doorstep during his next unauthorized walkabout.

A few years ago, mom and dad moved into an addition we built onto our house. So now it’s easier for Charlie to go for visits. Lately, he has been making his preference clear by hiding in the bushes when I try to get him to come into my side of the house from the backyard. When I give up and go inside without him, he emerges from hiding and trots up to my mom and dad’s back door. Then he turns on the pitiful puppy-dog eyes routine until they let him into their living room. My theory is that he prefers hanging out with people closer to his own age (who also happen to be people who are too generous with table scraps.)

That day when I saw Charlie’s slow shuffle up the stairs, I felt a pang of fear and dread because I’ve lived long enough to have had to say goodbye to some incredible dogs we’ve loved dearly. Even the thought of it can instantly trigger tears. As painful as the endings are, it in no way eclipses the joy of living life with them. And there is something uniquely special about a dog in his golden years.

Don’t get me wrong. I’m a sucker for a puppy and always will be. In fact, I have a theory that we’d all have much better mental health if we could spend at least an hour a day with one or more puppies. They are joy on steroids.

But old dogs are equally wonderful in their own ways. Charlie’s napping skills are second-to-none. And when we want to watch Netflix, he curls up next to me on the sofa and never judges us for binging six episodes in a row. He will simply go to sleep, roll over on his back to stretch his legs into the air, and then let his mouth hang open a little as he dreams his doggie dreams. His sweet face is so wise and weary that I can’t even bring myself to fuss at him when he passes gas and hogs the blanket.

So, if we have to rig up a stair lift or carry Charlie upstairs to bed each night, we’ll do it. Because it’s a gift and an honor to take care of a good, old dog.