Last night I let our Beagle Charlie out into the backyard for his usual “last call” potty break before going to bed for the night. I walked away from the door and soon after heard him start barking furiously.

Afraid he’d wake the neighbors, I rushed back to the door and turned on the outside lights so I could see if he’d treed a squirrel or spotted a rabbit. Instead, I saw our fearsome “guard dog” barking his fool head off at a large bag of garden topsoil that Tom had left in the yard earlier that day. 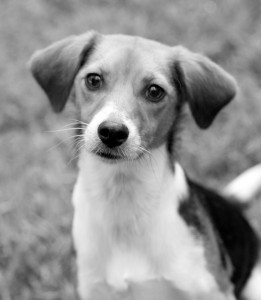 Even though Charlie’s bark sounded threatening, I could tell that the bag of topsoil was winning the fight. Charlie slowly circled it, leaving at least a 10-foot perimeter between him and the bag. Every now and then he’d flatten his belly to the ground and cower, as if the bag might sprout legs and chase after him at any second.

I stood there, wondering how long it would take before he figured out that the bag was a non-threatening, inanimate object. I wish I could tell you he realized it quickly. He didn’t. Even after he got close enough for an investigative sniff, he still ran away from it skittishly, afraid of just how much he did not know about the hulking yellow bag.

Of course, it’s easy for me to mock our scaredy-dog for being afraid of a bag of dirt. But the truth is, Charlie and I are not all that different. I worry about the “what if’s” as much or more than anybody.

When the kids were little, I, like many new moms, worried about strangers jumping out of bushes and kidnapping them. I couldn’t help myself. I kept a protective hand on them almost constantly and was always scanning crowds for anyone looking suspicious. It felt like it was hard-wired into my maternal DNA.

One day I was reading a news article about crime rates and was surprised when I read a statistic that said child abduction rates have actually gone down over the years and that the chances of a child being abducted by a stranger are actually less than the risk of a child being hit by lightning. I told Tom about it, and he said, “See? That means you can stop worrying so much. Doesn’t that make you feel better?”

A rational person would have said “Yes, it does,” but instead I said, “I had no idea that lightning was such a threat!” And from that point on, I was afraid of kidnappers AND thunderstorms. Tom just shook his head and muttered something about me being ridiculous which, I admit, was fairly accurate.

What I’m realizing lately is that we all have something that scares us that probably shouldn’t. For me, it’s the beginning of a novel I started writing months ago and have been too afraid to continue writing because, well, it might be really bad. Or even terrible. What if I finish it only to find that it’s an embarrassment, a 50,000-word failure? That unfinished novel is a big bag of the scary unknown – just like Charlie’s bag of topsoil. So I bark my excuses at it and keep skittishly avoiding it even though part of me wants to take it on just to see if I can.

For Charlie, for me and perhaps for you, too? It’s time to stop barking at bags.