Mamas, join us in a round of applause for Metro Appliances & More for allowing us the pleasure of giving away such amazing refrigerators and washers and dryers here on nwaMotherlode. They love Northwest Arkansas moms and it definitely shows!

And now I’m sure you’re wondering who won the beautiful refrigerator, right? Well, the winner is…

When Tamara received our email about winning, she wrote back and said: 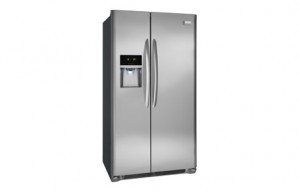 Then she immediately called us to confirm that she had indeed just won a refrigerator. When we said absolutely, she said: “I’m shaking right now. I can NOT believe this!”

Tamara is mom to 4 kids (ranging in age from 13 to 13 months), so her refrigerator gets a huge workout every day. And her current one is NOT up to the task. The Lewis’ bought the refrigerator about 3 years ago from Craigslist and it has been a big lemon, Tamara said.

She said it makes this loud clanking noise that is just awful. And a repairman has made more than a few visits to their house.

Tamara and her husband, Drew (who’s in his last year of residency in family medicine), love to cook so now they’ll have lots of room for leftovers.

Tamara is from the Northwest Arkansas area and has two sisters who also love to cook. They got the cooking gene from their mom.

A special note: Tamara told us her dad was diagnosed with ALS a year ago in September and we know she would appreciate your prayers for him and her family. There is no known cause or cure for ALS, so they are just taking it one day at a time.

We’re glad to have made Tamara’s day with this cheerful refrigerator news!

Again, congratulations to Tamara and her family and a huge THANK YOU to Metro. We’ll post some pics of the fridge in its new home soon.