In June of last year, I wrote about a tiny turtle my kids rescued from a swirling pool filter and turned into a pet named Zippy. For the record, I was in favor of releasing Zippy back into the wild to do whatever it is turtles do.

But the kids thought that, because she was a small orphan, she’d need special care. So Zippy went from the pool filter to a shoebox and then to her own tank complete with filter, fake plants and a bridge for sunning herself. Our youngest kid, Kate, and her dad oversee all turtle feedings and tank cleaning because I have a strict “I-don’t-touch-reptiles” policy.

So, imagine my surprise two weeks ago when I learned we were about to become a two-turtle household. Kate had made an impassioned plea to her dad about how sad and lonely Zippy the Turtle had been looking lately. (How does a turtle look sad or lonely? I have no idea. You’d have to read a lot into it to come to that conclusion. But I digress.) 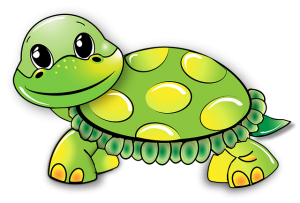 Tom agreed that Zippy might need a turtle tank-mate, and he took Kate to the pet store to order one. They did have the good sense to order a girl turtle, since we don’t want turtle offspring. The pet store clerk said the red-eared slider turtle would arrive in a week.

Kate was so excited when the pet store called to say the new turtle had arrived. She’d already spent a week coming up with the new turtle’s name – Ruby. But after she and her dad returned from the pet store, I could tell something wasn’t quite right.

“Didn’t you order the same type of turtle that Zippy is?” I asked.

“Yeah, the pet store lady said it’s the same kind. But the new one is… bigger,” she said.

“Maybe it’s just older than Zippy is,” I said.

I went over to Zippy’s tank where they’d put the newcomer.

“Oh my gosh, it’s a giant! That thing is easily five times the size of the other one. Aren’t you worried it might eat Zippy? It probably thinks Zippy is an appetizer, like a mini quiche or something.”

Tom gave me a stern look suggesting that turtle cannibalism was probably not a thing I should be saying out loud. But there was no denying the drastic size difference. Zippy is the size of a yo-yo, and Ruby is the size of a softball that swallowed a yo-yo.

“No, I think they’re gonna be friends,” Kate said. “They just have to get used to each other.”

Perhaps she was right. I don’t know if she facilitated turtle ice-breaker games or what, but the turtles seem more comfortable with each other now. And why shouldn’t they be? The pet store clerk said that, because of Ruby’s size, we should get a bigger tank to house them. (That means we’ve had to buy a 10-gallon starter tank, an upgraded 40-gallon tank, various tank supplies, a water filter, a turtle roommate and several packages of food – all for what started out as a free turtle stuck in a pool filter. But who’s counting?)

So now Zippy and Ruby live in our daughter’s bedroom in the Taj Mahal of turtle tanks. Kate snapped a photo of them yesterday, which she claims proves that they are indeed now best friends. In the photo, little Zippy is perched on Ruby’s shell. Kate says it’s a piggy-back ride. I said that Zippy probably doesn’t realize that Ruby is a fellow turtle and instead assumes she’s a large rock that occasionally moves.

The Internet says we’re both wrong and that turtles often “stack” on top of each other to get closer to the sun or their source of light and heat. It’s called “basking.”

Kate says Zippy is basking because she’s so happy about her new friend. (To the casual observer like me, Zippy’s demeanor is exactly like it was before we got a second turtle and a bigger tank.) But Kate is happy about the turtles’ happiness, so I suppose I’ll just bask in that.