Since late March, we’ve been building a small guest home attached to the back of our house. After five months and a few frustration-fueled meltdowns, it’s finally done. Over Labor Day weekend, we moved my parents into the space.

So far, it’s working out great. The plan was to make it easier for me and my mom, who still works a full-time job, to tag-team with each other as we look after my dad, who has dementia. It’s nice to walk a few steps across the backyard deck and step through a sliding glass door into their living room. The kids love it, too, mostly because Memaw’s cooking is far superior to anything they’ll get in my kitchen. 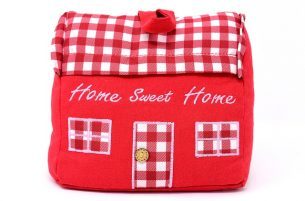 The hardest part of the move, as it is with almost any move, is the “Stuff.” I purposefully capitalize the word just like a proper noun. Because Stuff has a way of taking on a life of its own – growing and spreading until it takes up far more space than a living, breathing person.

This isn’t the first time my parents and I have had to deal with Mr. Stuff. In the past 40 years, Mom and Dad have moved twice. The first move, which happened seven years ago, took them out of my childhood home and into a much smaller townhouse with half the square footage. The most recent move took them from that townhouse into a 700-square foot guest home at our place.

The packing process made it obvious that Mr. Stuff had become a bloated mess and was holding on to things he’d probably never use again. But this clutter creature doesn’t like confrontation. He feeds on denial and delay. Mr. Stuff insists there’s no problem, while at the same time crowding a car out of the garage so he can turn it into his own private den of stuffiness.

It’s best not to go into battle alone when confronting your Stuff. My mother – who never met a knick-knack she didn’t love – feels more fondness for Mr. Stuff than I do. That’s normal. They’ve been together a long time. So it was easier for me to throw out the empty Cool Whip tubs she’d saved and the folder full of my third-grade school papers because Mr. Stuff didn’t whisper sweet, sentimental memories in my ear the way he did to her.

Mr. Stuff can also be irrational. When he’s passionately defending his need for a monogrammed bowling ball last used in the late 70s, he’ll use every trick in the book to convince you. One of his favorite lines is that “one day” you might need this thing. The ever elusive “one day” rationale goes like this: Because you never know what might happen “one day,” you should keep an entire house full of stuff “just in case.” (Storage units all over the country are chock full of “just in case.”)

What I tell Mr. Stuff is that even if “one day” does eventually arrive, he’ll never be able to locate the thing that might come in handy because it’s buried beneath bins and boxes. (Mr. Stuff hates that answer.)

Mr. Stuff also manipulates emotions. He’ll try to guilt-trip you into thinking that getting rid of an item that was given to you by someone you love is the same thing as slapping that gift-giver in the face. For the record, I’m pretty sure that friendships and family ties are not dependent on the retention of ceramic cats or decorative bird houses. (Mr. Stuff begs to differ.) 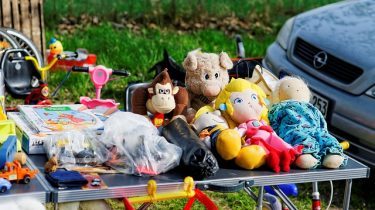 Once we finished “The Great Sort of 2018,” we had a garage sale with the piles of things deemed “too good to throw away but not enough room to keep.” We donated the items leftover after the sale, which trimmed down Mr. Stuff to a more manageable size, versus the hulking beast he once was.

The sort, sale and moving process has had a lasting effect on me. Lately, when I go shopping, I see everything through “yard sale goggles.” I look at a shelf full of brand-new items and get an automatic glimpse of them sitting on a dusty card table in the garage, bearing a 50-cent sticker. It’s much easier not to buy something when you can already picture your future self pricing it for a garage sale. Try it for yourself and see if it helps.

And here’s a final word of advice: Go a few rounds with your own Mr. Stuff long before it’s time to move. He won’t like it, but he needs an occasional reminder about who’s in charge – you or your stuff.