You’ve heard of a missing person’s report, right? I may have to file a missing “pieces” report. Because I haven’t seen my kids’ ears in months. I’m beginning to wonder if they’re still there.

Where are those ears? They’re covered by headphones. As the mother of three teenagers, headphones have become a permanent fixture around here. They use them to listen to music, podcasts, videos, and they also use them to talk to friends with whom they’re planning online video games. The headphones are wireless, so they go everywhere the kids go – like electronic earmuffs.

I once thought headphones were great, especially for listening to audiobooks when I’m vacuuming and mopping. Housework isn’t as tedious if you can listen to a good story while you clean. But lately, I’m beginning to hate headphones for the way they’ve kidnapped my kids’ attention.

The problem is that headphone technology has become too good. These days, most headphones are noise-cancelling. And what that really means is that they’re also parent-cancelling. I’ve been technologically muted.

If I yell for someone to take out the trash, no one hears me. Sometimes the kids are actually in the same room when I’m making the trash request, but when no one moves, I realize each one of them is off in his or her own world of sound. So, I have to stand in front of them and wave my arms around wildly, as if trying to hail a cab in heavy traffic.

Finally, one of them notices that their mother is practically doing jumping jacks, so he nudges the headphones off one precious ear to investigate.

Kid: “What? Did you say something?”

Me: “YES! I’ve been saying something for the past several minutes, but no one is listening!”

Kid: “I didn’t hear anything. I had my headphones on.”

Me: “Yeah, I noticed. You always have your headphones on. That’s the problem! I need you to take out this trash.”

Then the kid shrugs and trudges off with the bag of trash, silently horrified by the notion of a world without headphones.

Remember that old question that goes, “If a tree falls in the woods and no one is there to hear it, does it make a sound?” By the same logic, if a parent calls your name a thousand times and your headphones are on, did your mom even make a peep? If you ask my headphone-wearing offspring, the answer is a resounding “no.”

This issue has forced me and many other parents to find a way into the stream of sound coming through our teens’ headphones. Since the headphones are almost always connected via Bluetooth to a smartphone, that’s the quickest method for getting a teen’s attention. I’ve checked with a few friends who also have teens, and they, too, say they’ve often texted their own kid from inside the house just to request a face-to-face conversation. 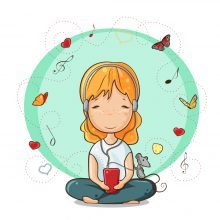 It is nuts? Yes. But this is life in the digital age. You either ban Bluetooth or use it to your advantage. Learn how to swim with all those streaming sounds, or wear yourself out trying to fight the current.

That being said, I think I’ll make a sign that reads “Headphone Free Zone” and post it at the entrances to the kitchen. Sooner or later, the kids will come to the fridge for food, and they’ll have to slip off the headphones and expose the ears I haven’t seen in so long. I can hardly wait. This mama needs a good old-fashioned conversation – no technology required.