Last week, our two teenage boys came home after their first day of work at a new summer job. My mouth fell open as they breezed past me because I’d never seen them like that before. They looked like walking dirt clods.

As the mother of two boys and a girl, I’ve seen my share of dirt. I’ve spent nearly half my life trying to keep it from being tracked inside the house. When the kids were little, we had a drainage problem in the backyard, so the ground stayed half-muddy nearly all the time. And when the kids were toddlers, we owned a sandbox, which is sort of like owning a giant vat of dirty glitter. It’s everywhere. All the time.

But until last week, I’d never seen the boys look like they’d actually rolled in dirt. It reminded me of the character Pig Pen from the old Peanuts comic strip. I could almost see the clouds of dirt swirl around them as they headed toward the showers.

When the boys secured this summer job, we all thought they’d be working at an “agricultural lab.” In my mind, I pictured something with gleaming floors, white countertops, microscopes and test tubes. But we’ve since learned that an agricultural lab – especially one focused on cross-pollinating soybean plants – is often located in the field, which I suppose is logical since that’s where the plants live. 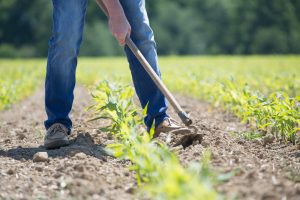 So, in addition to helping soybean plants reproduce, my boys have also been hauling around bags of seed, weeding, placing irrigation lines, driving pick-up trucks around the fields, and sweating their teenage butts off. One of them has a big toe that met the business end of a hoe and has since turned purple.

Even though the job is physically harder than they anticipated, the boys appreciate a cold cup of water now more than they ever have. They crave the difference shade can make. And at the end of the day when the work is done, air conditioning feels like a miracle – the best thing modern man has ever invented.

They’re waking up early to get to work on time. They’re going to bed even before their ancient parents. And they’re sleeping the deep sleep of people who have physically wrung themselves out during the workday.

When my brother and I were kids, our dad drafted us to go on tree-trimming jobs with him. While he climbed the tree with his chainsaw to cut off limbs, we stood clear and then dragged the heavy limbs over to Dad’s dump truck. It was hard work that came with scratches, sweat and mosquito bites.

And when my husband Tom was 17, he spent a summer working as a roofer with his older brother-in-law. The thing he remembers most from the job was realizing how much he wanted to find a job that didn’t include dangerous heights, heavy lifting and sun on shingles.

Even on our most challenging days in our current “indoorsy” jobs, we both know our working conditions are far from difficult. We’re grateful for it. Thanks to this summer experience, our sons will now know the difference, too.

They’ll also now have a different perspective and appreciation for people in careers that include mental concentration while also handling whatever Mother Nature throws your way. Careers like construction, power line repair, growing food, agricultural experiments, rescuing people from flood waters and so many others.

Fast forward back to this summer: After the boys showered that first day, they told us how tricky it is to cross-pollinate a soybean. Then I noticed one of them still had a stubborn streak of dirt on his arm even after the shower. It took a second scrubbing to get the baked-on grime to give up. Then they applied a generous coating of aloe vera lotion to soothe the skin that had turned bright red in the sun. (They’ve since learned the importance of reapplying sunscreen a few times a day.)

When they get their paychecks for this summer work, they’ll know they’ve earned them with both body and mind. And this time, for the first time in their lives, I think these guys will be more than happy to go back to school.