By Gwen Rockwood, columnist and mama of 3 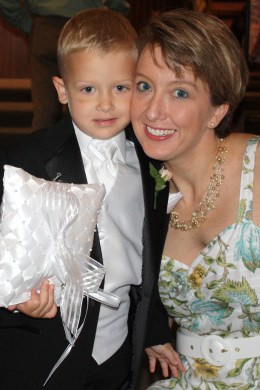 I know this because I’m the mother of a ring bearer fresh off his debut performance, and I unconsciously held my breath for the duration of the hour-long ceremony. I don’t know why I was so nervous, seeing as how we’ve done this before when our oldest son bore the rings in a family wedding two years ago. But this wedding was different because this time the bride tapped our middle child for the honor, and my little Jack has a knack for the unexpected.

While our oldest boy is a meticulous planner and rule follower, 4-year-old Jack likes to fly by the seat of his Spiderman Underoos. He’s a passionate, headstrong kid who rarely meets an impulse he won’t follow. When he was 2, he went through an extended “naked phase,” and I’d often find a trail of his clothes leading to a little nude toddler sitting amongst a pile of Lego blocks. One time when he was 3 and potty training, he had a wetting accident while at the Chick-fil-A indoor playground. Instead of stopping to alert me about it, he simply stripped off his wet undies and kept on playing “au naturale” from the waist down. Since he turned 4 last spring, he has occasionally been frozen by shyness and hides behind my legs when it’s time to meet someone new.

Knowing all this, my husband and I did all we could do to prepare him for the big day. We talked about the tuxedo and the church full of people, and we helped him practice the official wedding walk several times each week. He was so excited about being the “ring bear” and seemed ready for it.

I knew the wedding would be fine despite any antics Jack might pull, but that didn’t stop me from having this internal dialogue in the moments before the wedding started: “Who knows what he might do? Tuxedos can get kind of hot in the middle of August. What if he drops his pants and streaks down the aisle with rings in hand? What if he asks loudly for a juice box in the middle of the vows? What if he gets scared by all the new faces and hides behind the priest’s robes?” A mother’s imagination can do a real number on her nerves.

Thankfully, none of that happened. What I watched last Saturday was a lovely ceremony, from start to finish, and during his small part of it was my boy – walking strong and steady down the aisle. He never looked to me for an encouraging nod or thumbs-up sign. He didn’t need to. With some helpful nudging from the groomsmen, he followed the cues and did his job in style. As the ceremony ended, I watched him proudly march back down the aisle with a smile of satisfaction for what he’d done.

During dinner at the wedding reception, I sat across the table from my debonair boy and marveled at how much older he seemed. Maybe it was the sharp tuxedo he was wearing or the way he held his champagne glass full of apple juice, but suddenly it hit me that he’s really growing up – whether I’m ready or not. In another year, he’ll start kindergarten and I’ll have to watch from the sidelines as he begins a 12-year march to independence. That feeling of bittersweet anxiety mixed with pride gave me a brief glimpse into how it must feel to be the parents of the bride and groom – to see the babies who are your life’s work become wonderful, kind-hearted adults ready to embrace a commitment as serious as marriage.

Perhaps in a couple of decades, it’ll be my turn to watch Jack take that all-important step. But for now, I’m glad I still have time to hold him in my lap, tickle him before bedtime and fetch his juice boxes from the fridge. Life goes by so fast, and, more than anything else, a childhood should be savored.