I am bad at sports. Always have been. While other people bemoan the loss of sports during this pandemic, I haven’t missed it.

I understand the thrill of watching a close game, but I’ve never had that competitive spirit that drives so many athletes. When I was in middle school, the 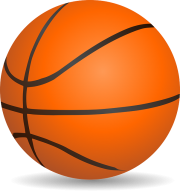 coach of the girls’ basketball team noticed I had a decent three-point shot. I could stand around in the gym with friends and sink quite a few from beyond the line.

After she put me on the team, however, she and I both realized I wasn’t cut out for the actual game. I was a shooter, not a player. I didn’t want other players to get in my face to try to steal the ball, and I had no interest in doing it to the opposing team. My 7th grade heart wanted to call a time-out and say, “Can’t we all just be friends? Maybe we could play a nice game of horse or something?”

After failing spectacularly at basketball by accidentally sinking a shot for the opposing team, the coach thought I might be more suited for track and field. Taller than most girls my age, I could jump a hurdle well enough. But I wanted to jump for the thrill of clearing the hurdle. I focused on getting over that long row of obstacles while remaining upright, not beating someone else to the finish line. After a brutal case of shin splints, I bowed out of track practice, too. 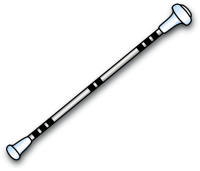 Thankfully, I found my true calling in the marching band, performing as one of the baton twirlers leading the band onto the field. While twirling is a competitive sport for many, I never saw it that way. For me, it was always about working with a team of girls to put on a good show. If the show was great, we all won – the performers and the audience. No trash talk. No personal fouls. No nasty conflict. Just the thrill of a great show.

But last weekend, I discovered that maybe there is a bit of competitive fire in me after all. While flipping channels, Tom landed on ESPN which was broadcasting a professional cornhole tournament. The players wore masks and kept their distance while launching square bags filled with corn kernels at a board with a hole near one end. Something about those little bags flying 27 feet toward a target spoke to me. “We should do that today,” I announced. “Let’s find a cornhole set for the backyard.” 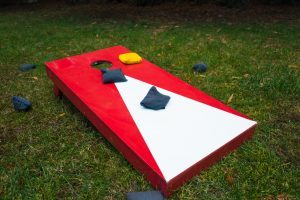 So, we called around town to find a set in stock and then picked it up while wearing our full pandemic uniform of mask and gloves. Once it was set up in the backyard, our son googled the rules and taught us all how to play and keep score. It’s nice and simple, just the way I like my sports.

After a few practice rounds, the games began. Perhaps it was all those years throwing batons that prepared me for the moment, but it turns out I’m not half bad at cornhole! I beat Tom and then our daughter and then our oldest son and then I had a few close games with our middle son, who’s either pretty skilled or pretty lucky, depending on who you ask. He beat me on the last throw of the last tournament.

But while he’s playing video games, I’ll be in the backyard practicing my technique, perfecting my aim. When we have a rematch, that kid won’t know what hit him. It’ll be an epic cornhole blowout. I won’t let the fact that I carried him in my body for nine months keep me from crushing him like a bug during the next cutthroat game of cornhole.