When we left last weekend for our little cabin in the woods, we had five family members in the minivan. When we returned, there were six. Here’s how that happened:

On Saturday a small gray cat showed up to greet us at the cabin. She weaved between our legs and opened her mouth to “meow,” although no sound came out. We weren’t surprised to see her because the cabin is on one of those woodsy roads where pets wander from house to house quite often. Our kids sometimes play with two of the neighbor’s dogs who trot down the street when we’ve got burgers cooking on the grill.

But this cat stuck around for hours, sleeping on the deck and rushing to the door any time someone came out. The kids wanted to pet her, so I checked her out to make sure she was friendly. When we started petting, I realized this was probably not a pet that was out for a Saturday stroll. Underneath her long gray hair, I felt nothing but bones. She was starving, and her mute “meow” couldn’t even tell us how bad it was.

We cut up some bologna and cheese and fed her, although Tom (who has always been “anti-cat”) insisted we do it a few yards from the house so she wouldn’t think of our place as “home.” She gobbled down the food quickly.

After the kids went to bed, Tom and I sat in the living room reading and watching TV. About 9 p.m., a little gray head with pointy ears appeared in the window closest to where Tom was sitting. She put one paw up on the window and mouthed her silent “meow” while staring deep into Tom’s eyes.

“So much for the plan to feed her a few yards away so she wouldn’t come back,” I said.

“Well…. I’ll go give her some water, but we’re not getting a cat,” he said once more with emphasis.

After giving her a bowl of water, he settled back onto the sofa. Ten minutes later, the gray furry head appeared again in the window. She raised her paw to mime her “meow” for Tom and then she walked down to the window closest to me and repeated the same pitiful scene. She continued working on us every 20 minutes or so for the rest of the night. The next morning, she was waiting on the deck and rubbed up against the kids’ legs when they came out to give her food.

“We’re not getting a cat,” Tom said, in case I’d forgotten overnight.

“And we’re not leaving that animal here to starve, either,” I said, which is something he knew for certain that I’d say.

We asked neighbors if anyone knew her, but everyone agreed she was a stray, probably dropped off by someone who didn’t want her. A neighbor let me borrow a travel crate to put her in, and we packed up our bags and our stray and headed for home.

“We’re not getting a cat,” Tom said during the drive. “This is just temporary until we find her a good home.”

Once we got home, I ran out to the store to fetch a litter box, cat food and a little red cat collar with a bell. We wiped the cat down with some damp cloths to clean her up, and she ate until she was full and promptly fell asleep on the rug, purring her gratitude while the corners of her mouth turned up ever so slightly. The kids circled around her, agreeing that she was the coolest cat ever.

“I think we’ve been adopted by a cat,” I said, gently breaking the news to Tom that I’m sure he already knew.

“Well, I’m not cleaning that litter box,” he said.

Later that night, I found our new skinny cat on Tom’s lap, curled up contentedly while he scratched her head. And I think they’ve forged an unlikely bond. Tom has worked in sales for his entire career, and this weekend he came face to furry face with a cat who knows one of the most effective strategies for getting what you want: “Ask for the sale.” And this cat asked – over and over and over again. She stayed in front of us, and we couldn’t ignore her need.

The only thing left to do was name the newest member of the family. So we did. We call her “Percy”, which is short for “Persistence.” 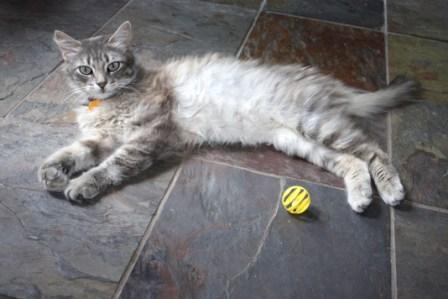