Last night we watched the finale of a sitcom, The Middle, that we’ve followed for nearly 10 years now. Tom was on a business trip, so it was just me and the three kids parked on the sofa. One of the boys left during the first few minutes of the show because he was magnetically drawn to the Xbox in the other room. The other boy seemed only halfway present, as he occasionally glanced from his phone to the TV screen while wearing headphones and listening to music.

As the show’s big finale unfolded, two characters – who’ve been in love with each other all season but weren’t sure that the other person felt the same way – finally got together. That’s when I heard my daughter make the most wonderful sound: 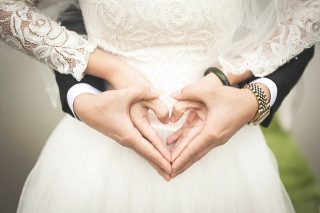 “Awwwww! That’s so sweet!” she said as she looked over at me.

“I know!” I agreed wholeheartedly. I clapped my hands in excited approval and she joined in the applause. It felt like we’d arrived at a real milestone – mother and daughter clapping for a love story.

As we cooed over the romantic ending, my son briefly surfaced from his iPhone haze. He looked at us and then at the television to see what the fuss was about. He rolled his eyes, shrugged his shoulders and looked back down at his phone. Clearly, he wasn’t as emotionally invested as we were.

But finally – finally – somebody in this family besides me “gets it.” My 11-year-old daughter is now old enough to have the appropriate reaction to two people falling in love and having their magical moment. I could hardly wait to tell Tom that Kate inherited the sentimental gene. I bet she’ll grow up to watch reruns of her favorite love stories over and over, even though she can practically quote the actors’ lines from memory.

In our nearly 20-year marriage, Tom says he has lost count of how many times he has walked into a room to find me watching a “chick flick” I’ve already seen at least five times.

“Don’t you get sick of it? The same movie over and over?” he asks.

“No, of course not. Some movies are good every time you see them,” I tell him.

“You know, you get the same look on your face every time you watch one.”

“The look you get when a show or a movie has a sappy ending.”

“I do NOT get a certain look.”

“Yes, you do. You get this little smile on your face.”

“I’m not saying it’s a weird look. It’s just a look, and you definitely do it.”

I always thought he was making up the nonsense about a certain “look,” but last night I realized maybe he’s right because I saw it for myself on our daughter’s face. Her eyes lit up and she smiled like she’d been let in on the most wonderful secret.

When she’s old enough, maybe we’ll watch a marathon of chick flicks with a tub full of popcorn while I introduce her to some of the classic scenes that stand the test of time – like when Richard Gere climbs up the fire escape toward Julia Roberts. Or when Ryan Gosling kisses Rachel McAdams in the pouring rain. When Johnny rescues Baby from the corner. And when Harry shows up to kiss Sally at midnight on New Year’s Eve because “…when you realize you want to spend the rest of your life with somebody, you want the rest of your life to start as soon as possible.”

She’s going to love it. We both will. And when we’ve seen them all, I hope she smiles and says, “Let’s watch ‘em again.” True love and magic just never get old.