There’s a new baby in the Rockwood house. Born on May 20th, he weighs in at six and a half pounds and is 18 inches long. He’s got two big ears, four short legs and 20 toenails that make a rapid clicking sound when he trots across the kitchen floor.

His name is Cooper, and he’s a Corgi puppy. 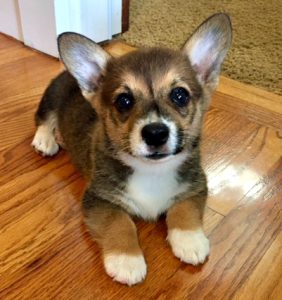 It’s funny how quickly my “protect the baby” instincts have returned, even though it has been a decade since we had a newborn in the house. I find myself shushing Tom and the kids so they won’t wake the puppy. “He’s cranky when he doesn’t get a good nap,” I whisper as I tiptoe around the crate where he’s sleeping. And I don’t even mind too much when he wakes me up early in the morning because I’m happy to scoop him up and snuggle him under my chin.

Puppy love, much like that gushy feeling we get about newborns, must have been designed by God. He knew babies and puppies would need to be extra adorable so we’d persevere through these first few months, when taking care of them feels like a full-time job.

When we adopted Charlie the Beagle five years ago, he was already over a year old and was full-grown. So I’d forgotten how challenging the puppy phase can be. With house-training as our top priority, we’re taking Cooper outside for potty breaks about once every two hours or whenever he does any suspicious sniffing. He’s a discriminating dog, which means he inspects each blade of grass before deciding which one to pee on. Sometimes, just when I think he’s finally picked a suitable spot, a bird chirps nearby or a neighbor’s garage door goes up, and the distracting sound sends Cooper into a barking frenzy, making him forget the reason we came out there.

I suppose I should be thankful he’s so interested in protecting me from strange bird sounds and nearby garage doors. What he lacks in physical size, he more than makes up for in puppy bravado and a willingness to sound the alarm at anything he deems a threat. For the past few days, I’ve been taking him with me when I go out to check the mail. When I open the mailbox, Cooper dances around my ankles barking wildly, certain that the black beast is about to devour my arm with its strange metal jaws.

Speaking of jaws, did you know that the only thing sharper than those infomercial Ginsu knives are the teeth of a 12-week-old puppy? I’d bet good money that Cooper could bite through a tin can, if we let him. He’s got the fur of a soft, brown bunny but the teeth of a ticked-off piranha. 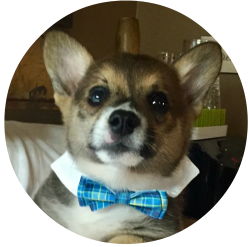 Our daughter Kate, who is an excellent puppy wrangler, sometimes calls him “Count Pupula” when he chomps down on her hand instead of his dog toys. Even though it’s normal puppy behavior, “play biting” is only fun if you’re the puppy. We’ve been watching a lot of dog training videos about how to teach Cooper not to use hands as chew toys.

Meanwhile, our Beagle Charlie has taken this whole “new puppy” thing in stride. He mostly ignored Cooper the first few days after his arrival but has slowly begun to take an interest. He did snap at him once, but only when Cooper was acting a little too big for his puppy britches. “Settle down, kid,” Charlie seems to be saying when he stands authoritatively over the playful newcomer. I predict the two will be buddies before long.

In the meantime, we’re taking turns making trips outside for puppy potty breaks, and we’re doing our best to protect our shoes, rolls of toilet paper, and anything below knee-level from meeting its fate beneath those razor-sharp puppy teeth. But when Cooper falls asleep and dreams his puppy dreams and then wakes up and covers us in kisses, all the extra work feels like a labor of love. 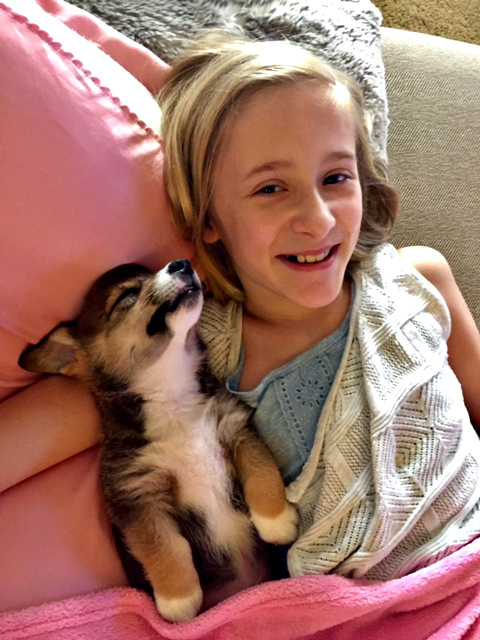