Our Beagle Charlie has forced our hand. Lately he has taken the art of breaking out of the backyard fence to a whole new level, so we had to get creative.

This mission to keep Charlie at home has been going on a long time. After we adopted him five years ago, we asked a dog trainer to help us teach him to obey commands. Overall, the training went well. He learned to sit, shake hands and to high five with his paw.

The only command that didn’t stick? “Stay.” The trainer warned us it would be difficult. Even though Charlie understands what we want him to do when we say “stay,” ultimately he obeys the wishes of his bossy Beagle nose. And his nose knows only one command – “Go!”

When he catches the scent of a squirrel, rabbit, or anything within 100 yards of our yard, Charlie’s ears and brain turn off. His legs take orders from his nose, and off he goes – like a Beagle-shaped bullet.

Complicating matters is Charlie’s mixed breed heritage. Our veterinarian thinks he is part Italian greyhound – a breed known for speed. So, when you combine a Beagle’s scent obsession with a greyhound’s speed, you get a dangerous combination – stubborn and fast – two words that describe Charlie best.

Lately it seems Charlie’s wanderlust has been worse than usual. Every time we think we’ve made our fence a fortress, he finds a new way out. A few weeks ago, he started forcing his body through the wrought-iron spindles of the gate – a space that seems far too narrow for him to fit through. But somehow, he does it.

So when Charlie needed to go out for a potty break, we put a harness on him and hooked it to a long cable tied to a tree. It gave him plenty of room to walk around the yard but wasn’t quite long enough for him to reach the fence and squeeze through. We only left him out for half an hour, but when we came back to get him, the cable was hooked to an empty harness. Charlie had pulled hard enough to wiggle out of the harness and slip through the fence bars again.

The timing couldn’t have been worse. It was July 3rd, which meant that as soon as dusk fell, people around us started setting off fireworks. Charlie must have thought it was the apocalypse because instead of running around for an hour and then coming home like usual, he stayed gone half the night. We’re guessing he must have hunkered down in the woods and waited for the bombs to stop falling.

At three in the morning, we heard his familiar bark in the front yard and opened the door to find him standing there – dirty, smelly and freaked out from fireworks.

In our quest to find a solution, we asked our friend Lillian, who is an accomplished seamstress and crafter, to help us with an unusual plan. We gave her a dog harness to see if she could add something to it that would stick out and prevent Charlie from being able to squeeze through fence bars.

A couple days later, she came back with an ingenious idea. She took the chunky plastic rings from a toddler’s stacking toy and slipped them around the buckles of Charlie’s harness. There are five rings total, sticking out on each side of his body. They’re firm enough to keep from being squished through fence bars, but they’re light enough not to weigh Charlie down. We put him into the odd-looking harness and watched to see what would happen. 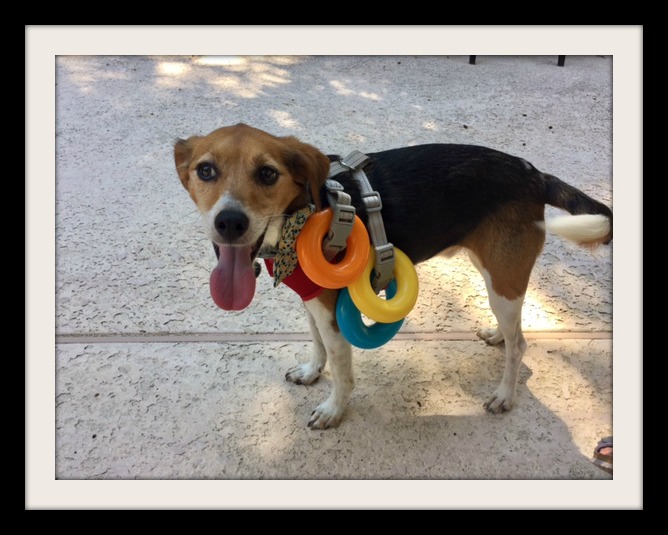 So far, the dog harness (also known as a doggie fat suit) is working like a charm. Every time he tries to squeeze through the fence, those oversized Froot Loops get in the way. Perhaps we’ve found the answer!

But if he does eventually figure out how to slip through the bars in his new-fangled harness, he’s going to get a lot of strange looks in the neighborhood. It’s not every day you see a skinny Beagle wearing a harness with what looks like chunky Olympic rings sticking out in every direction. And to that we say, “whatever works.”