I was in my favorite city last week — Vegas. It’s not my favorite because of the gambling, the shows, the “free” drinks, or any of that. It’s my favorite place because we always meet the most interesting people.

The first morning we were down at the craps table with one other person. It was early, but we’d had our coffee and were ready to play. This old man (I’d say in his 80s) walked over to the table. He was super nice and had a ton of questions. Apparently, he’d been up in his room watching all the tutorials. He tentatively pulled his money out of his wallet and laid it on the table. It was his turn with the dice and he was shaking – literally shaking – with nervous energy. He could barely hold the dice. He had been wanting to learn to play forever and was finally brave enough to try. I asked him if he was out there gambling alone or with family and he said his wife was up in the room, but he thought she’d make him nervous so he wouldn’t let her come down until he had played for a while. 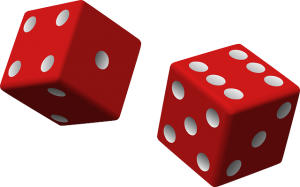 I thought…performance anxiety at your age?! But I let the thought go and just laughed to myself. It may have been the mimosa getting to me. Maybe.

The old dude was good and rolled us some awesome numbers, shaking the whole time. He was almost sweating! I was really proud of him for doing something that obviously made him uncomfortable. It reminded me to always be doing, always be learning, and always, always do the things that scare you the most.

We say goodbye and head to a different casino and meet a very nice guy from California. We talk and high five a lot and win a lot of money and then lose a lot of money together. We bonded. Then we went our separate ways.

A couple nights later, we walk into a restaurant and end up eating at the bar. The guy next to us turns around and it’s our California man. What are the odds? (I’m sure they actually know the odds for this in Vegas, but…I’m guessing they are pretty low.) Anyway, he starts talking about how long we’ve been married and blah, blah, blah, and it turns out he’s from India and he and his wife had an arranged marriage. Now, that is interesting. They met a month before they got married. A month.

They lived in India for a year or so – about the length of time it took them to have feelings for each other(!!). Then they moved to the US. He had lived here before, but she hadn’t. She’d never been out of India, and now she was living in San Francisco. Can you imagine? They lived there about a year, and she took a job in Kentucky for 9 months. She taught herself how to drive. She only saw her husband once a month. How brave do you have to be to accomplish all of that?

Don’t people have the most interesting stories? It’s a shame that we end up traveling so far away to hear them. Everyone has their story, if we’d just put down our phones and quit trying to tell our own stories, we’d learn so many things.

I also learned that if a guy on the street asks for crack, but you give him deep fried Oreos, he’s just as happy.

But that’s a whole other story.