A few days after he told me about the year-long affair, I told him to move out. Until then, he slept in the playroom upstairs. 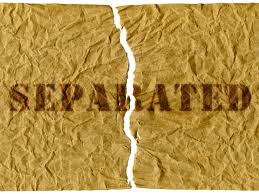 Even though he was out of the bedroom, I felt like I was on the edge of a cliff anytime he was in the house. When he finally left, so did the huge weight bearing down on me.

But then the financial fear moved in. How was I going to pay the bills? I’d been home with the kids for six years. I’d taken a part-time job at a preschool a few months earlier but I knew it didn’t pay enough to cover the bills and buy groceries every week. Despite the low pay, that part-time job became my salvation in a lot of ways after my marriage imploded.

Speaking of salvation, I prayed a lot during those first few weeks. Still do. Having your marriage melt down will take you to your knees – literally and spiritually.

I grew up in the Catholic Church, but over the years I’d grown away from it spiritually. This marital shipwreck made me realize I needed God more than ever before in my life. Not only did I go to church every week, as I’d always done, but now I was doing an hour of adoration in addition to mass every week. I was lost in so many areas of my life. Church was my rescue. Prayer became ritual several times a day in order to make sense out of what was happening to me.

I considered it a daily accomplishment when I managed to think of anything else besides hating, despising, and seeking revenge on the other woman. Family and dear friends kept reassuring me that I didn’t need to lower myself to her level. But it was so hard. The intensity of those feelings is overwhelming at times.

I can hear the question most women might have at this point in the story: “Did you hate your husband?” I didn’t, despite the bomb he’d dropped into our lives. In the weeks right after learning about his affair, all I wanted was to fix our marriage. I couldn’t just give up.

I had already been going to a women’s Bible study and we were reading “The Power of a Praying Wife.”  The bomb was dropped after I finished this Bible study, and I felt really let down by God. I talked about it with a Christian counselor I’d been seeing for a little while before the affair news broke. In the aftermath, I asked my husband to go with me to see this counselor and he agreed. I thought, “Yes. There’s a chance!”

But after that one visit, he said he wasn’t going back. Ever. After two months of hoping, I realized our marriage was going to end in divorce. And that left me with the crushing, terrifying feeling of moving forward — alone.

But of course I wasn’t really alone because we had two small children in the middle of our life’s mess. They were too young to really understand what divorce was but I did manage to explain why Daddy was going to live somewhere else.

The “divorce talk” with the kids played out just like I thought it would. My husband sat there silently staring at the kids and cried. I had to do all the talking.

A few days later, I had to take the kids to his apartment for their first weekend visit with him — post separation. Even though he was there with me in the delivery room when these kids were born, I felt like I was taking them to a stranger’s house. I will never forget the pain in my gut after leaving them that day. It felt like the day he’d told me about the affair, except this time I had to spend the whole weekend alone in a big, empty house.

This series, Single & Surviving, is written by a Northwest Arkansas mom who is writing anonymously for now. Click here to read her previous post. Her story will continue with another post in a few weeks, when she describes what has happened in her life following the divorce. Please post comments for this writer by clicking the orange comment button below.