I just got home from a trip to the Walmart Supercenter, where a kid had just thrown up on the cereal aisle, and that’s not the worst thing that happened.

As a mother of three, I’ve seen my share of pukey kids. I gave that fellow mother a look that said, “I feel your pain, sister.” Then I hightailed it to the next aisle. But there was something even more unsettling than the bodily fluids on the floor of Aisle 5.

They’ve rearranged my Walmart! I’ve been shopping at this store for nearly a decade. I know this place better than I know some of my own cousins. But now they’ve turned my old, familiar Walmart into an entirely new place, and nothing is where it used to be – where it should be.

My first clue that something was “off” came as I cruised down the bread aisle. Suddenly I caught the faint whiff of spearmint, which is when I glanced to the left and noticed that an entire row of gum, chocolates and candy are now facing the shelves of bread and buns. “What in the world?” I thought. “Why are candy-coated gummy worms across from the bread?” 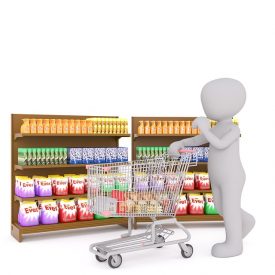 Before this bizarre switcheroo, it was coffee, tea and jelly that used to be across from the bread. It was easy to remember because bread turns into toast, and most people have toast with jelly, coffee or hot tea. It’s a perfectly rational pairing. But who chews gum while they’re having toast in the morning? I’ll tell you who. Crazy people.

I pushed past the wacky bread-plus-candy aisle, hoping the mix-up was limited to Aisle 1. It wasn’t.

The displaced coffee that used to live in harmony with the bread has now taken up residence across from the Ramen noodles. Can you believe it? And there were other odd combinations, like the salty snacks on the cereal aisle. Who eats cashews with Cheerios? That’s nuts!

When I went down the aisle that has always had chips on it, I breathed a sigh of relief because my beloved Tostitos were still in the usual spot. But now bottles of wine have replaced the jars of salsa that used to be across from the chips. Chips and wine? Okay, I’ll make peace with that one. That could work.

But no matter how hard I looked, I never could find the fruit chews that used to sit next to the cereal bars. By the time I got to that item on my shopping list, I was too tired from hunting through the rearranged store to bother with finding a store employee to ask where they’d been moved. I had that feeling we used to get as kids when we went to a birthday party and played a game of Pin the Tail on the Donkey. It was like being blindfolded and spun around 10 times before being turned loose to get the groceries.

With most of the items crossed off my list, I trudged to the check-out lane and began putting things on the conveyor belt. The check-out clerk, a boy who looked like he was closer to 12 than to 20, looked up at me and said, “Wow, you look tired!”

(Note to store managers everywhere: Please train your clerks to never look at an exasperated middle-aged woman and tell her she looks tired. Trust me. She already knows she looks tired. Unless you have a time machine on Aisle 7, there’s not much she can do about it. But I digress.)

When I got home, my teenage son asked me if I’d remembered to get the fruit chews he packs in his lunch box. I told him I couldn’t find them.

“But they’re always on the cereal aisle, Mom,” he said.

“Nope. Not anymore. They moved it somewhere.”

“Who knows? I searched everywhere. Maybe they put fruit chews next to cans of motor oil now. The world has gone crazy, son. I couldn’t stay there forever looking for fruit chews.”

I kicked off my shoes and sank down onto the sofa, wondering how long it’ll take before this new store layout feels familiar.

I’m not saying Walmart can’t ever make changes and rearrange things. I’m just saying they should maybe check with me first. Because if they had, I would have said, “Don’t go changing, Walmart. I like you just the way you are.”