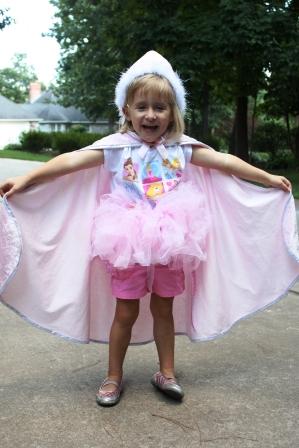 On Tuesday night, I took my 3-year-old daughter Kate to see Disney’s Beauty and the Beast musical at Walton Arts Center. It was opening night for this show, and the place was packed! Kate dressed up in all her princess gear, including a pink tutu, just before we left for the show. Can you tell by looking at this photo that she was a tad bit excited?

The musical exceeded my expectations (which were pretty high to begin with) because it truly was like seeing the movie come to life on stage. The stage scenery and the costumes were incredible. And the singing? Well, I had multiple “goose bump” moments throughout the show.

The only thing that interested me more than what was happening on stage was the look on my daughter’s face as she was watching the show. You know how a little kid looks when she is completely surprised and completely thrilled at the same time? It was…. awesome. I won’t forget it, and I know she won’t forget this trip to the theater. At one point in the performance, right after the Beast roared at Belle, Kate turned to me and said, in a very serious tone, “That Beast has bad behavior!” But don’t worry… he redeemed himself in the end and became a “nice Beast.”

After the show, we bought one of the full-color programs with photos of the musical, and she has been “reading” it to me ever since we got home Tuesday night — giving me a play-by-play recap of everything that happened on stage.

We’ve been told there are still good seats available at several of the remaining performances of this show. So if you’re thinking of going to see it but were waiting around to hear whether or not it’s worth the trip, trust me. It’s worth it. You can get tickets by calling the Walton Arts Center box office at 479-443-5600 or by clicking here to check on ticket availability. Hope you enjoy it as much as we did!

Below is a video review recorded at the Walton Arts Center right after opening night. This contains opinions by other audience members on opening night as well as some footage of the performance.