I remember it like it was yesterday: we awkwardly – and delicately — clicked the car seat into the base and I gingerly climbed into the backseat with my screaming newborn. After a ride down from room 616 in a wheelchair – and realizing that I’d have to wear house shoes and my pregnancy clothes home – it was time to leave with our precious cargo.

My husband pulled out of the hospital parking lot like a 96-year-old man with acute arthritis. His hands were claw-like on the wheel, he gripped it so tightly.

When we finally hit the main road, he picked up the pace — only slightly. Every passing vehicle was a potential threat – every pothole leading to a possible case of shaken baby syndrome. We didn’t breathe until we got her home and into the house. Then we slumped down together in the shared gratitude that we had made the trip home with our new baby unscathed.

That was seven years ago. Now that our presh-us has stopped spilling apple juice quite as regularly on the car upholstery and only occasionally jumps into the backseat with her feet caked in mud, we decided to get a new vehicle. Well, that and we wanted to take advantage of the government’s “Cash for Clunkers” incentive. My husband’s old Jeep met the requirements so we decided to trade it in (and it’s a good thing we made the decision last week, since the $1 billion is apparently pretty much done for). We got the entire $4,500 as a trade-in allowance since the gas mileage on the new RAV4 is so much better than what we had with the Jeep. 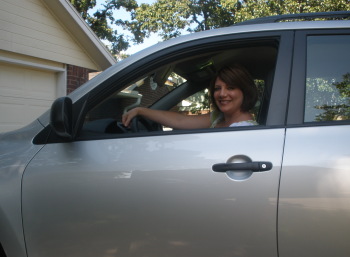 The way I’m acting with the new vehicle is what reminded me (somewhat) of that first ride home with Ladybug. Every time I drive out into traffic I feel like cars are intentionally swerving into me or pulling out in front of me. I’m sweating by the time I make it home and the silver paint is still pristine.

Ladybug and I went to the Springdale Aquatic Center the day after I signed all the paperwork making me the (first-time) owner of a new SUV. Each time we reached the top of the tall water slide, I looked over into the distance for the silver glint of my new baby. I had parked it out in the back 40, but everyone in NWA was at the water park, apparently, because they even started taking up parking spaces way over by me. Once, I panicked because I thought it had been stolen (my keys were in the beach bag, after all!), but realized it had been obscured by a banged-up black pickup truck. “Oh, lordy,” I thought, “that pickup was probably hauling seven kids and they’ll all throw open the door and let it slam into my car.” Then I thought, “You are a freak. Certifiable. Chill out.” But I didn’t.

I chose silver over white because I thought it might hide scrapes better. Well, that and I swore I wouldn’t have another white vehicle again. I had just spent about 13 years driving two white cars. Unfortunately, when I test drove the only two RAV4s they had on the Fayetteville Autopark’s lot, they were silver and white. The silver would have been a no-brainer except the white one had advanced security options and blue-tooth capability. And there was only a few hundred dollars’ difference.

So for five days I test drove the white, then the silver, then the white. I was relieved when someone else showed an interest in the white one because I felt satisfied that I had the silver one home with me. I realized I would be “settling” if I went with the white one. So silver it is. (Special thanks to salesman George Torres at the Autopark for his endless patience with my indecisiveness.) And, nope, I wasn’t given any incentives to write about the Autopark on my blog. Not unless you count that fifty cents I borrowed to buy a Dr. Pepper.

Everyone says I’ll get over my protective tendencies after the vehicle is a few months old. For now, I’m just staying off the road unless it’s absolutely necessary. Maybe then I’ll be able to drive with abandon like my husband apparently can.

Yesterday, when he returned from errands and drove wayyyyy too fast into the driveway, I felt a little murderous.

I greeted him with: “Dude, you just evil-knieveled up the driveway!”

Update on the kitten: She has a name! Ladybug finally settled on “Asia”. She’s adorable. See for yourself: 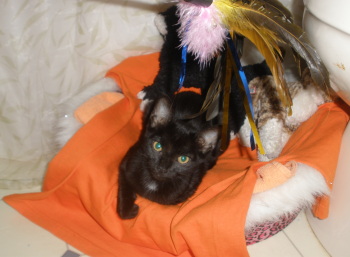