My family (parents, siblings, nieces, nephews) as a whole drives my husband nuts and it’s getting close to that time of year when we’re all together a lot. He’s not used to a big family and I know it can be overwhelming. How can I make it less stressful for him?

GRAY: Don’t let your family descend on him like a wave of faceless, nameless zombies. If he’s not used to a large family, the confrontation can be daunting. While you have the luxury of having known them all your life, he’s faced with scores of names and faces, who they are in relation to you, what they do (or used to do) for a living while still juggling aspects of the holidays.

It may help to talk with him about the folks he’s not met or spent much time around and refresh his memory about the ones he’s forgotten about since the last visit. Hopefully it’ll give him a sense of familiarity when he does encounter them face to face.

It may help to let him have conversations with one person at a time. Two or more tend to regale newcomers with stories rather than allowing them to talk about themselves, which can be as isolating as Uncle Ned.

Don’t put the turkey in the oven and forget to take him, er, it out when it’s done. While you certainly want to catch up with your family, try to keep him in mind and don’t leave him alone all afternoon or evening. Establish gestures so he can say “Help me now!” from across the room with a wave of his hand. Break into conversations and sweep him off to another room to talk with someone else. Better yet, take some time for just the two of you to talk for a couple minutes periodically to make sure he’s doing fine.

The holidays are a great time for family. Make sure he feels like he’s part of it and not the third, or 15th, wheel he may feel like. It’s up to you to ensure he comes away from it feeling more connected to everyone and not with an ear full of Coast Guard recruitment stories.

MICHAEL: I know how your husband feels. My wife’s family is the same way. Its large and there’s lots of noise. I’m a pretty quiet talker and have always felt it was rude to be loud. So when there’s ten different conversations going on at the same time it can drive me crazy. In my case it’s not that I don’t like them it’s just a little overwhelming. Sometimes a lot overwhelming.

Seeing as I can relate to your husbands situation, I’m going to tell you what I would want my wife to do for me. Provide him opportunities to get out a house away from them without looking like he’s rude. Volunteer to run to the store together. Find an excuse, any excuse, to get some quiet and calm. Even if it is just for 15 minutes.

And don’t ignore him. What I mean is, when you’re there I know you want to see your family but he’s part of that too so make sure that you don’t treat him differently than you do at home. My wife has a tendency to go into “family” mode and I get left out in the living room while she goes off and talks in another room. Not fun. Be a couple. Show him that your grateful that he’s there even though you know it’s uncomfortable for him. Remember you left your family to marry him. Make him feel like you’re glad you did.

MAVERICK: You can do a couple of things.

First, make sure he has a way of escape.

While you might love hanging with your huge family for days on end, for him and likely anybody else for that matter, it’ll be like rolling in cactus naked.

Encourage him to take frequent breaks. Give him a guilt-free opportunity to go to the bookstore, or drive over to a sports bar or a sushi joint so he can have some down time away from all that togetherness. You could even facilitate this by sending him on a errand for something that you don’t really need and letting him know he’s free to stay gone as long as he wants.

Don’t send him on important missions for vital food items or other products. He’s bound to get something wrong and it’ll just amp his stress level up. These errands are for him to make some space, not to actually do stuff for you.

Second, let him know it’s okay for him to do his own thing even while the family is there.

Assuming he’s making decent attempts to be social and interact, give him a pass to slip away to a bedroom and watch a movie, or catch a TV show  he likes. Often at “family” things one or two of the dominant males will control the remote and dominate what there is to watch. Your husband might be able to sit through an episode or two of Ice Road Truckers, but don’t expect him to sit though the day long marathon.

Cut your husband a break when it comes to dealing with your family by paying attention to what’s going on. If he’s hung up by your brother, nodding his head for the umpteenth time, while your bro talks about how he rebuilt a transmission 10 years ago in the snow, for goodness sake rescue him.

The same goes with kids. If the one kid he can’t stand is making him nuts, cut your hubby some slack and intervene. Trust me, it is not cute when he slides off to take a walk so he doesn’t start screaming and all the kids decide they’re gonna tag along with him. Help the dude out. 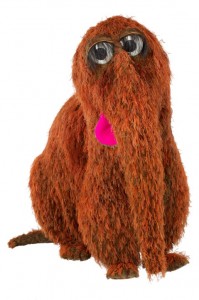 Sure your husband is a grown up and needs to be able to handle your family, and he should be polite and kind. But the holidays tend to put families in close contact for long periods. Visiting spouses tend to have less flexibility and often are forced to endure much more togetherness than family members who can retire to their own nearby homes at their leisure.

Finally, come up with a safe word. When he uses it you must come to his aid by doing something appropriate for the situation — like changing the topic of conversation, nixing an idea for a movie to watch that evening, or punching your Aunt Trudie who won’t shut the devil up.

In my family, that word is Snuffleupagus.