Somehow over the last few months, both our boys have become bicycle crazed. If they’re going somewhere, it’s on their bicycle with a helmet on their heads and a smile on their face.

It’s really gotten out of hand—the worst part of the day is tearing them away from Runway Bike Park in Springdale as it’s getting dark (when the park closes). 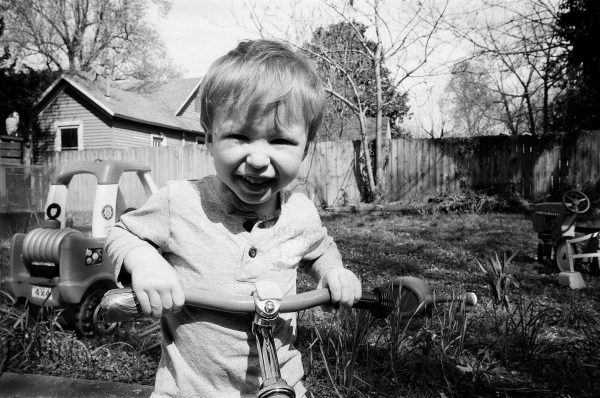 Sometimes I wonder how we got here, where riding bikes is like breathing to them. And apparently a number of friends have too, since I’ve gotten a few messages asking me how in the world to get their tots interested in balance bikes. I’m no expert, and I didn’t have a plan going into it, but I’m happy to share what we did with Henry and Elliott.

Both boys are on balance bikes for the moment.

At age 3 and a half, I imagine Henry could handle a pedal bike soon enough, but I like how comfortable he is on his balance bike right now. I’d rather him build up all that confidence and enjoy it. Next spring we’ll have plenty of time to get into that next stage. 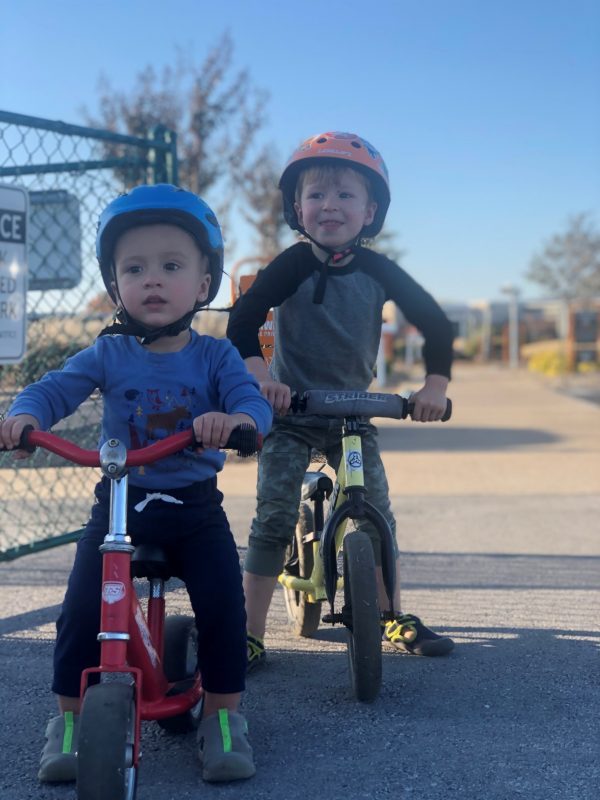 It all started around Henry’s first birthday when I put a balance bicycle on his wish list that we sent to family. A dear aunt and uncle, who enjoy spending long hours on their own bicycles, thought it the perfect gift and took the time to research and purchase just the right one. 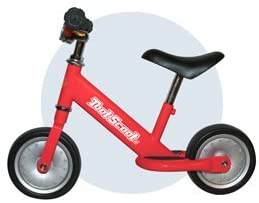 They gifted Henry with a sweet little red Toot Scoot, which I think is ideal for ages 1 and 2. Its wheels are short, solid and wider than typical bicycle wheels. The seat is comfy and adjustable, as are the handlebars. It also has a pair of footrests that are just adorable in use when your little one gets comfortable enough to use them mid-stride.

Henry really was not all that interested in it while he was 1, but I kept it out a lot so he could simply get used to it. In the first year that he had it, I let him ride it around the house a bit. He would pick it up and use it to make his way around and around the kitchen table. Looking back, it may not have been the best on our beautiful hardwood floors, but in my defense, it hadn’t really been outside yet and we had a long winter to get through together.

The summer he turned 2, we took it to the backyard where he experimented with it here and there, riding it down the sidewalk and back from time to time. Between that and other ride-on toys, like his fire truck, he clearly grew accustomed to carrying himself in this new, exciting way.

Somewhere between 2 and 3, an uncle and aunt from the other side of our family handed down a yellow Strider balance bike that suited our growing Henry. 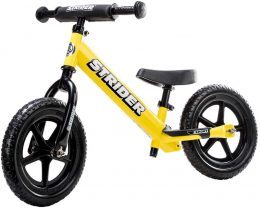 It too has adjustable seat and handlebars, but the wheels are more average. I think of it as just one more step in introducing him to what a big boy bicycle will be like.

Then the fun really began because we could hand the Toot Scoot down to Elliott, and the boys could enjoy riding together. They seemed to feed off each other’s energy for this. Elliott wanted to keep up with Henry, and Henry wanted to improve so he could clearly be the better rider of the two of them.

Once August rolled around this year, I was confident enough in Henry’s ability to let him ride his bike next to me while I pushed Elliott in a stroller. We took my usual route through the neighborhood, which is about a mile and a half, and experimented. Some days we took shorter routes, and he would complain because he knew it wasn’t our typical surroundings. He was motivated to do the whole thing. Other days, I would take him on longer routes to see where his comfort level was. 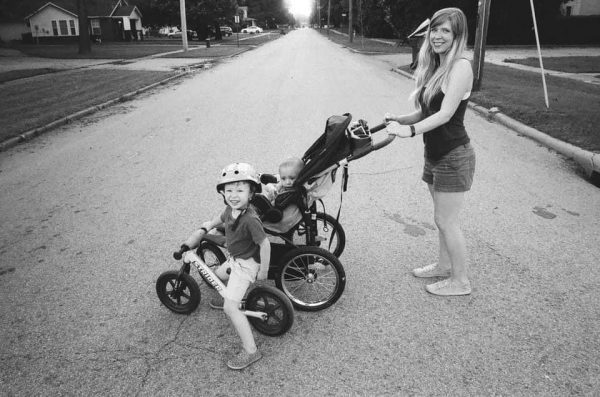 Seeing his big bubba leave the double stroller was a little alarming for Elliott, who at first in this stage would call out for his bubba for a good part of the ride and he seemed to feel a little left out. By this point (19 months) he would anxiously climb out of the stroller once we got home so he could practice riding in the backyard.

When I have my husband around for backup, I’ll let Elliott ride through the neighborhood too, that way each of us can take over one boy and keep everyone safe. But I found that during the week, heading off to a quiet park was much easier to let them both run free with their bikes. Here’s a video clip of our toddler, Elliott, in action at the bike park.

It’s been nearly four months of practice now, and for the last month or so we’ve spent every free minute at the Runway Bike Park. It has courses of various levels, boardwalks, tunnels to go through, a helicopter to race under or around, and concave concrete paths. So many interesting things for them to explore! I never go without having at least an hour and a half to spend, because it’s hard to break them away once they get started. 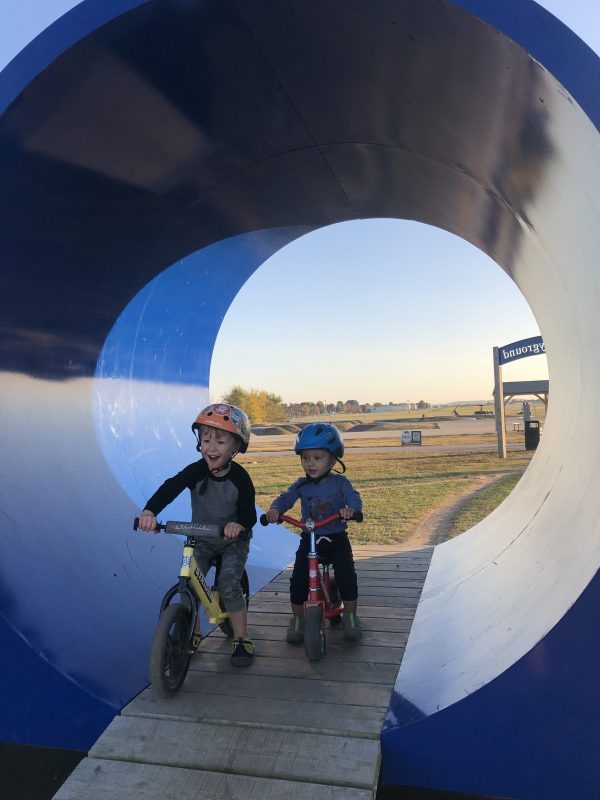 In short, we’ve given them bicycles easy to maneuver that are easily adjusted as they grow, helmets to protect them, plenty of opportunity and lots and lots of backup. Any time they ride, I’m never far away—ready to help right them, kiss boo boos, straighten helmets and send them back on their way. 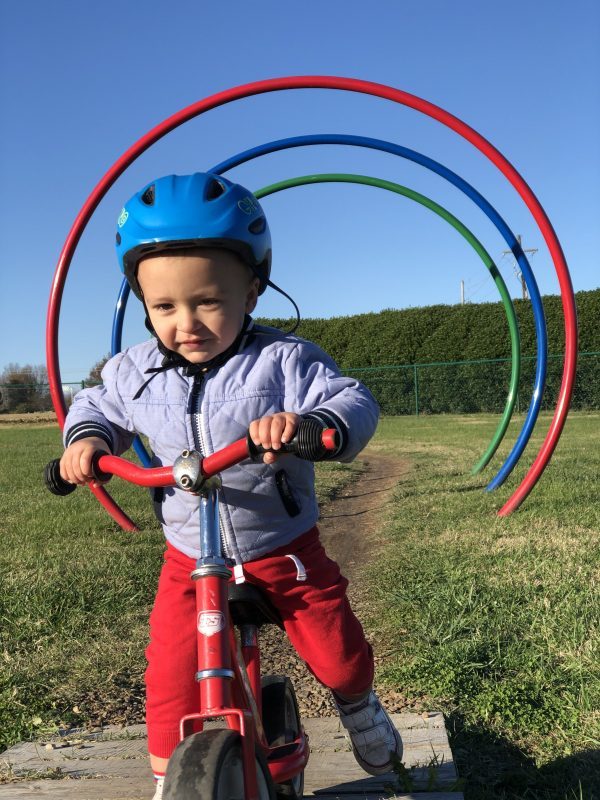