1 And it came to pass in those days, that there went out a decree from Caesar Augustus, that all the world should be taxed.

2 (And this taxing was first made when Cyrenius was governor of Syria.)

You know how much I love you, dear readers. I always want to encourage you. But I’m gonna fuss at some of you a little bit today because you’re being silly, and it needs to stop. Let me explain.

I’m concerned about the way some people are acting about the coming election. In reading the news this week, I noticed that both political parties have said that, if the other team wins, it’s going to bring about The Apocalypse. That’s obviously bothering a lot of people. But those of you who know the Saviour should certainly know better than to believe all the hype.

So, please, don’t go around believing or telling folks that November 3rd is going to bring about The End of the World as We Know It. We Christians know that only God knows the future. And He holds it in the palm of His hand.

If we’re going to have a realistic view of this world, I think we need to put down our newspapers (or Twitter feed, news stream, Facebook page, etc.) and pick up our Bibles. Let’s start by reading these first two verses in Luke Chapter 3. (I’ve marked it for emphasis.)

In the fifteenth year of the reign of Tiberius Caesar 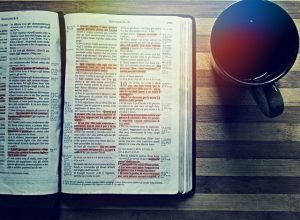 –when Pontius Pilate was governor of Judea,

his brother Philip tetrarch of Iturea and Traconitis,

and Lysanias tetrarch of Abilene—

during the high-priesthood of Annas and Caiaphas,

the word of God

Now go back and read that one more time. Look at the list of names. It’s an encyclopedia of treacherous and powerful world leaders. But the message from God does not come to any of those famous, important people. And it doesn’t even say that they were a major part of the Lord’s plan.

But then, the Creator of the universe gives His message. He sends it to a man all alone in the wilderness of Judea. And the Word of God comes to John.

It makes my heart jump when I think about it.

So, Christian friends, don’t run around thinking that any mere mortal is going to bring about the end of the world. When you talk like that, you’re giving human beings more power than they’ll ever have. That’s just not how God works.

Allow me to illustrate. Pretty soon it’ll be Christmas, and we’ll read the passage from Luke Chapter 2. Cyrenius will be the governor of Syria. And Caesar Augustus will send out a decree.

And the world will not come to an end. What will happen instead? A baby will will be born in a manger; He’ll be the Saviour of all mankind. See what I mean?

I feel pretty good right now. The Gospels say that the Word of God comes to regular people. So God is probably getting ready to speak to you.

Or maybe somebody named John.

Dr. John L. Cash is the “Country Preacher Dad.” He was raised in Stuttgart, Arkansas, and has spent the last 34 ½ years being a country preacher in the piney woods five miles south of the little town of Hickory, Mississippi. He’s currently on a sabbatical from the preaching ministry, and is an English teacher at the Choctaw Tribal School. He and his lovely wife, Susan, live in a brick house in town (where the preacher had all of his kids and grandkids spend the night for Labor Day.) You can send him a note at countrypreacherdad@gmail.com.