14 He causes the grass to grow for the cattle, And vegetation for the service of man, That he may bring forth food from the earth. Psalm 104:14  (NKJV)

When my boys were little, I was teaching school and Susan was at home with them each day. Sometimes I would call home to see what everybody was doing. It was always interesting to see what games the boys were playing to pass the time. One time when Spencer was about 4 and Seth was learning to crawl, I called the house and asked how the boys had spent the morning. Susan said that Spencer had gotten one of the things she uses to pull her hair back and was pretending that the Power Rangers had him tied up and he couldn’t get loose. For awhile he was tied up behind the front door, and then he was tied up under the edge of the bed.  She said that Seth (who always loved to be near Spencer) had just sat beside his brother while he “struggled” to escape.

When Seth was a little older, I called home to see what he had been doing. (The picture below is a picture of him when he was in kindergarten.) Susan said, “It took awhile for 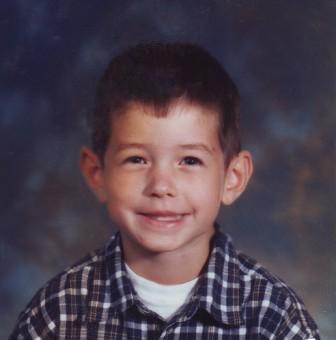 me to figure out what he was up to. From the kitchen window, I watched him play in the back yard. He got a stick and marked off a big rectangle in the dirt. Then he spanked the dog and taught him to stay out of the rectangle. With the stick, he plowed up his plot in rows. Then he came into the house and got a sack of dry beans. It was then I realized what Seth was doing. He was planting a farm.”

And thus began Seth’s love for making things grow. Last year he took Agriculture Science at the school where I work and kept us all supplied with turnips and mustard greens. Right now he is spending the summer at a Christian school—getting ahead on some of his high school required classes—and it is a school where the students work can work on a farm.  It’s not going to surprise me if he spends his free time on a tractor helping the farmers there. And before he left Mississippi, he took the pickup and carried tomato and pepper plants to all the older folks in our congregation to plant in their gardens. I’m trying to remember to water the vegetable plants he set out behind our house.

I think the impulse to be a gardener is something that comes from that fact that we’re made in the image of God. The Scriptures teach that God is the one who makes things grow. And he doesn’t just make flowers and vegetables grow—his main concern is the growth of people. It is so hard for me to believe that Seth (whom I used to wash in the kitchen sink) is now 6-feet-one-inch tall (and weighs a whopping 125 pounds)! And the little boy who used to plow rows in the backyard is now learning the lessons of God and making his mark in the big world!

I tell you this story because I want you to remember this important truth: “Mama, your babies are going to grow.” Before you turn around (and all too soon) the little babies that the Lord has sent to you are going to be teenagers and young adults. Enjoy each day with them—because every stage of life is the “best one”.

Ask the Lord each day to give you wisdom as you nurture and tend to the “garden of souls” entrusted to you. Your work will be rewarded. As James says in his epistle, “Peacemakers who sow in peace raise a harvest of righteousness.” (James 3:18, NIV)

Dr. John L. Cash is the “Country Preacher Dad.” He was raised in Stuttgart, Arkansas, and is about to complete his 25th year of being a country preacher in the piney woods five miles south of the little town of Hickory, Mississippi. (On week days he works at a public school.)  He and his lovely wife, Susan, and his sons, Spencer (age 19) and Seth (age 16) live in the parsonage next door to the Antioch Christian Church (where the house is quieter than usual this summer.) He would love to hear from you in an email sent to extramailbox@juno.com.