15 ¶ Foolishness is bound up in the heart of a child; The rod of correction will drive it far from him. ~ Proverbs 22:15  (NKJV)

When I was in elementary school, my father came home with a stern warning for me.

The man at the post office had told him that some school children had been vandalizing mailboxes. It seems that they had been putting Popsicles and Fudgesicles in the big mail collection boxes. The sweet treats were melting and ruining the letters that people had mailed. Daddy said that I shouldn’t do this, because it was a federal crime.

I assured my father that I was not guilty of this. In fact, the action had never even occurred to me.

“If I had a Popsicle, I wouldn’t want to waste it by putting it in a mailbox. I would want to eat it.  Why would anybody want to do that, anyhow?” I said.

The concept of “kid” was something that was unique to my father. He spoke of it pretty often, whenever a young person did something aggravating and pointless. And as I got older, I realized that he was substituting the word “kid” for a concept that the Bible calls by another name. The King James version called it “folly” and the NKJV referred to it as “foolishness.” 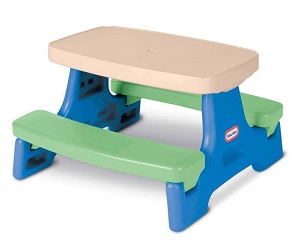 Something happened this week that made me have a “foolishness flashback.” Susan and I recently purchased a “Little Tykes” picnic table for our grandson. It was very similar to the one that we bought for our sons when they were little.

Their table had a hole in the side of it that was just large enough to admit a Crayola crayon. The longer we owned the table, the more crayons we had to purchase; little fingers were dropping them into the hole. When the boys finally outgrew the table and we gave it away, it rattled (with crayons) and was several pounds heavier.

Our grandson’s table is made a little differently than the first one. It doesn’t have a “crayon hole” in it. But it does a round opening in the middle of the tabletop where you can insert an umbrella.  Everything that you drop in that hole winds up in a mound under the table. And every day I sweep up a pile of animal crackers, Hot Wheels cars, mini marshmallows, Play Doh, and (you guessed it) crayons.

This behavior doesn’t serve any positive purpose.  It’s just the principle of “kid”—or “foolishness” (if you will).

Now, I think that you’ll agree that these are rather small (and harmless) examples of foolishness.  But much of the folly in the world isn’t small, and much of the foolishness is very harmful. In today’s Scripture lesson (at the top) the Proverb writer says that foolishness is “bound up” in the heart of a child. Children are just born full of folly, and it’s not going to lead to anything good.  That’s just a kid.

The passage goes on to say that it’s the parents’ responsibility drive this foolishness out of the heart using the “rod of correction.”  My late father (who is my hero) used a leather house shoe for his “rod of correction.” Looking back on it, being spanked with a flimsy slipper didn’t “hurt” me a bit;  the “pain” that I felt was from disappointing my father as he showed me I was falling short of God’s standard. I always adored my Dad for making sure that I was wiser when I left his household than when I was born into it.

It takes time, trouble, and energy to correct our children. But the Lord wants us to make the effort to teach them His ways. God will be pleased, and this world will be a more beautiful place to live in.

There’s nothing foolish about that.

Dr. John L. Cash is the “Country Preacher Dad.” He was raised in Stuttgart, Arkansas, and has spent the last 33 years being a country preacher in the piney woods five miles south of the little town of Hickory, Mississippi. He’s a retired Mississippi public schoolteacher with grown sons, and is now a stay-at-home-grandpa with his grandson, Landon Cash.  He and his lovely wife, Susan, live in a brick house in town (where Landon spent happy hours at his picnic table sticking stickers this week.)  You can send him a note at brotherjohn@ilovechurchcamp.com.