By Kim Blakely, mama of 2 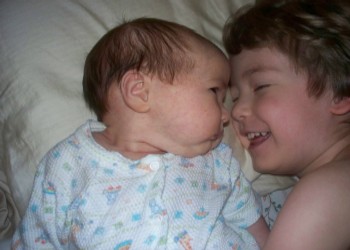 Moxie has been around for eight weeks, and I haven’t yet told y’all anything about the day she arrived … so here goes.

My husband and I arrived at Labor and Delivery just after 5 a.m., and I was worried because we were late. I have no idea why, really. We weren’t late enough that we would be turned away, and it’s not like they would start without us, right?

Mojo had woken up as we were leaving and cried for me. It was the first time in days that he even seemed to notice I was around – he had preferred to have my mom cater to his every whim and brushed off my attention like yesterday’s favorite toy. His sudden distress ripped at my heart.

I was teary on the ride to the hospital, whimpering to my husband that Mojo would feel betrayed when we brought home a new baby and that I was certain he would hate me for the rest of my pitiful life.

And truthfully, I was also wrestling with the fear that I wouldn’t feel as strongly about this little person I was about to meet as I did about the one I’d left sobbing in his bed at home. What if I didn’t love her right away?

To make matters worse, I was as thirsty as I might have been after a week in the Sahara. I had been drinking tons of water, but my supply had been cut off at midnight in preparation for surgery and I was in agony. No one seemed particularly sympathetic, telling me that I could have something to drink soon and that I should just try to focus on meeting my baby.

I couldn’t really focus on anything. I was fidgety – I couldn’t get comfortable in any position. I was hating the IV (who doesn’t, right?). And IWASTHIRSTY!

The lab lost my results and delayed my being taken to the operating room by at least half an hour, which felt more like half a day to my parched self, and in the meantime, my ob/gyn and an anesthesiologist who sounded like Barry White hovered restlessly.

Finally, at long last, I was wheeled off for the big event. I was … what? Terrified? Check. Excited? Check. Ready to get it all over with so I could see my baby/know that she was OK AND so I could finally quench my thirst? Check, check, check.

My husband kissed me and told me he would see me shortly, and before I could blink I was in the OR.

Another anesthesiologist was waiting there and he commented right off the bat that, based on my name, he was expecting me to look different. Was I sure I wasn’t Cajun, he wanted to know.

It took another anesthesiologist-type person three or four tries to get the epidural in – and one try resulted in an ultra-strong involuntary kick from my right leg, almost taking out the nurse who was holding onto me at the edge of the table.

Finally, I (with my already numb lower half) was hoisted into place and my husband was brought in to sit next to my head. (He told me later he wondered why it took so long, and that the anesthesiologist who wanted to know if I was Cajun had made a mildly off-color comment before bringing him in. The guy was a card.)

The surgery team got started sooner than I would have thought possible. They pinched parts of me, I’m told fairly hard, to determine that I couldn’t feel anything (I should insert here how grateful I was for this. When I was rushed in for a c-section with Mojo, I could feel those pinches and I got the sense that they didn’t always check that before slicing.), and it seemed like I felt them tugging Moxie out of my womb almost right away.

The Barry White-ologist insisted that I keep the oxygen mask on my face until the baby was out, despite my pleas that he take it off, but he purred over and over in that deep voice that I was doing fine, that things were great. I started to believe him.

The other anesthesiologist seemed to have one duty – making small-talk. I could hear him behind me in this corner or that making little comments and jokes, and I realized at some point that he was telling my husband, “That’s your wife’s uterus – look! Stand up so you can see it!” Barry White, I’m told, put a hand firmly on my husband’s shoulder and suggested that he sit back down (presumably because it wouldn’t do for him to be unconscious at the moment of his daughter’s birth).

That must have been when the extraneous anesthesiologist took control of our camera and shot photos of some of the scenes Barry White discouraged my husband from viewing. 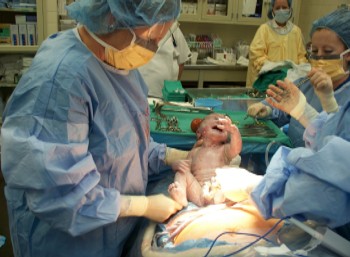 It was only minutes into this that I heard Moxie’s cries. And my heart … I don’t know – it fluttered and I got chills and I waited for someone to tell me something, anything about the little girl who was making those sounds. They held her over the curtain so I could see her, and I think someone brought her up next to my head so I could get a closer look for just a couple of seconds before they whisked her over to the warming table to do whatever it is they do to robust, healthy babies.

My girl screamed, loud enough that the medical team commented on the volume, the entire time it took for them to put me back together. And then my husband put her in my arms for the trip back to our room. That’s when she stopped screaming. And that’s when, for at least a little while, I forgot about how desperately thirsty I was.